Methods: Standard strains of cultured fungi were used to prepare spore suspension samples with a concentration of 1,000,000 spores/mL. DNA samples were extracted with a one-step lysing heating method (LHM). Primers and probes for aspergillus fumigatus (A. fumigatus), aspergillus flavus (A. flavus), aspergillus niger (A. niger), and aspergillus terreus (A. terreus) were designed with the Primer Premier 5.0 and Beacon Designer 7.7. The most effective primer probe was obtained after an FQ-PCR detection system screening which tested the efficiency and amplification effect for extracting aspergillus DNA via a one-step LHM, and verified specificity, repeatability, and sensitivity of the reaction system.

Results: No non-specific amplification was found. Coefficient of variation (CV) of Ct values in repetitive intra- and inter-assay experiments were less than 5 % (0.37 % - 3.53 %). All four aspergillum sensitivities reached at least 35 spores/mL after the established reaction system was detected.

Invasive aspergillosis (IA) is a chronic fungus-caused disease caused by aspergillus. It affects the respiratory, blood, digestive, and other systems. It is the most common respiratory system fungal infection[1]. There are many species of aspergillus. Aspergillus fumigatus is the most common IA pathogen, followed by aspergillus flavus, aspergillus terrus, and aspergillus niger[2]. Children who have organ transplants such as lung or stem are highly susceptible to Aspergillus infections [AI]. Mortality can be as high as 66 % and 76 % depending on risk factors[3]. Children, who have a neutrophil count of less than 500 cells/mm3, large burn areas, tumors, or who have undergone long-term immuosupression or hormone therapy are susceptible to AI. Their post-infection mortality is greater than 70 %[4].

Early diagnosis and treatment are closely associated with prognosis. Presently, the auxiliary detection method IA diagnosis includes smear microscopy, fungal culture, histopathological examination, imaging method (high resolution CT), and serological method. None of these methods combined with clinical manifestations accurately or quickly detect IA. PCR technological advances have improved the speed and accuracy of AI diagnosis[5]. FQ-PCR is the most widely-used and studied method and is the most feasible.

2.2 Methods 2.2.1 Inoculation and culture of aspergillus

Bacteria in an ampoule bottle was dipped with a disposable, sterile plastic inoculating loop and planted on Sabouraud dextrose agar (SDA) plate medium using the three-spot technique. It was sealed with parafilm and incubated for 3-4 days. The medium was then inverted in a mold incubator at 37°C. A standard-strain Petri dish was rinsed with normal saline to collect the spores after the culture of 3-4 days. Spores were counted with a hemocytometer. A suspension liquid with spore concentration of about 105 spores/mL was prepared as the standard strain stock solution and refrigerated at -70°C for as a standby.

Aspergillus fumigatus, aspergillus flavus, aspergillus niger, and aspergillus terreus genomic sequences were downloaded from the GeneBank of the National Center for Biotechnology Information (NCBI). Relatively-conserved sequences for four aspergillus genes were identified. Primers and FAM (Fast Auxiliary Memory) probes for each one were separately designed with the Primer Premier 5.0 and Beacon Designer 7.7. The sequences were subjected to Blast analysis via the Genebank nucleotide sequence database to detect high homologies with the nucleic acid sequences of other bacteria, virus, or human genes. Primers and probes were synthesized by Shanghai Branch of Invitrogen Corporation. The amplification products were sent to Sangon Biotech (Shanghai) Co., Ltd. for sequencing.

A standard strain stock solution of 102 spores/mL was diluted into the pre-test sample in a ratio of 1:1, 1:2, and 1:3. Sample DNA was extracted with the one-step combined heating method. Then the selected primers and probes were subjected to the FQ-PCR analysis to find the minimum positive-test concentrations which was the sensitivity test for this method. 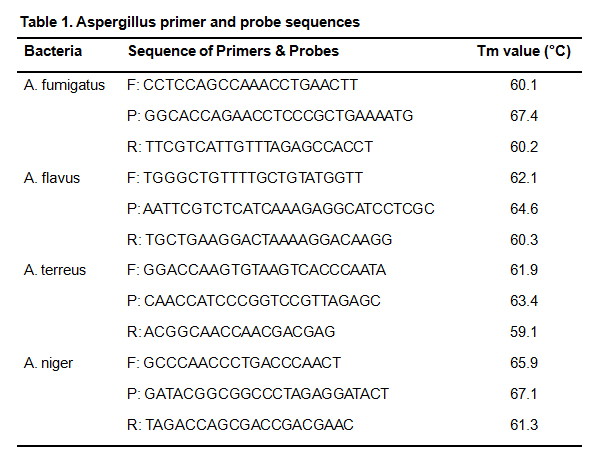 In order to verify aspergillus primer and probe specificity and test for the presence, or absence, of homologous sequences among the aspergillus and between the aspergillus and other bacterial, fungal, or human genes, all of the above DNA samples were simultaneously subjected to the FQ-PCR reaction under identical conditions with the selected primers and probes. After the specificity tests for four aspergillus, no specific amplification was found. Test results were showed (Fig. 1). 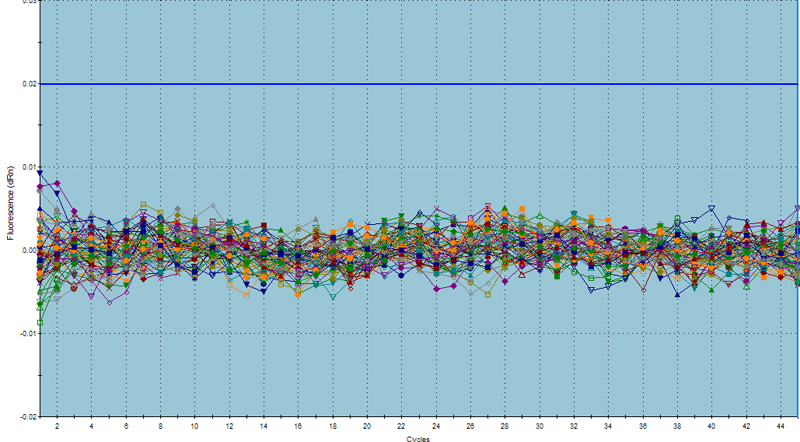 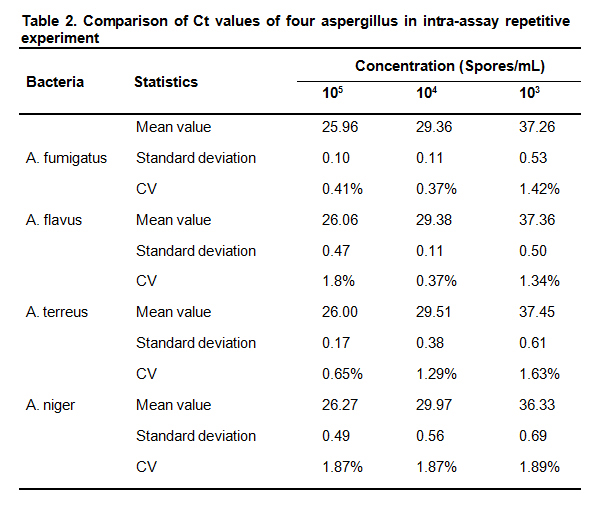 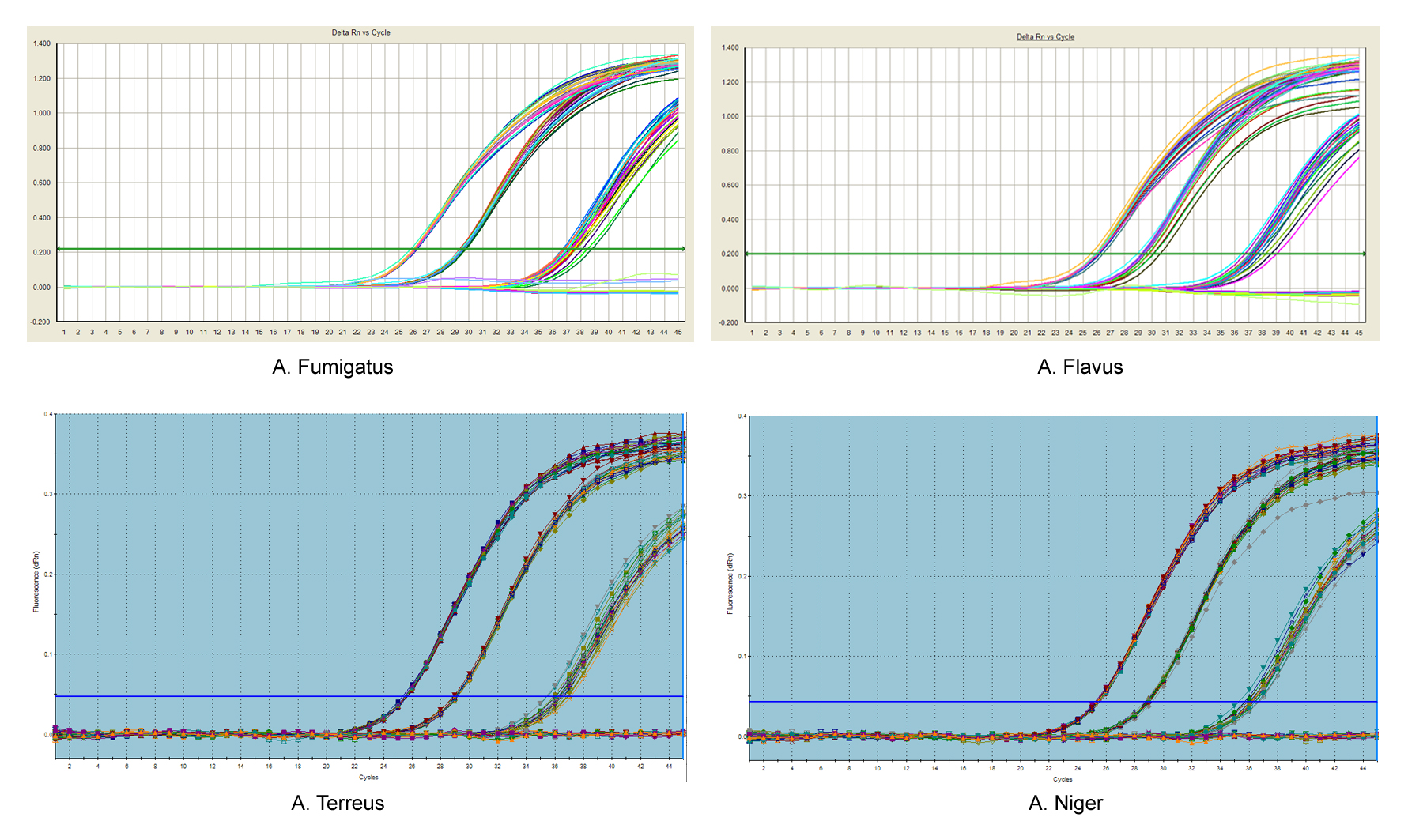 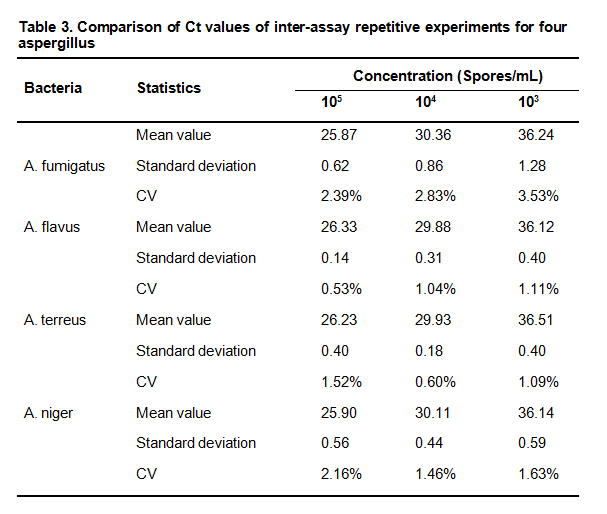 Amplification curves were easily observed in the sample size of 103 spores/mL in the repetitive tests. The samples of four aspergillus were diluted 1:1, 1:2, and 1:3 by taking a specimen of 102 spores/mL as the basic specimen. This was done in order to detect any lower detection limits of the PCR detection system. Diluted samples of each batch were tested for 20 times. A diluted sample served as the pre-test sample for the FQ-PCR detection. Detection results are shown (Fig. 3). 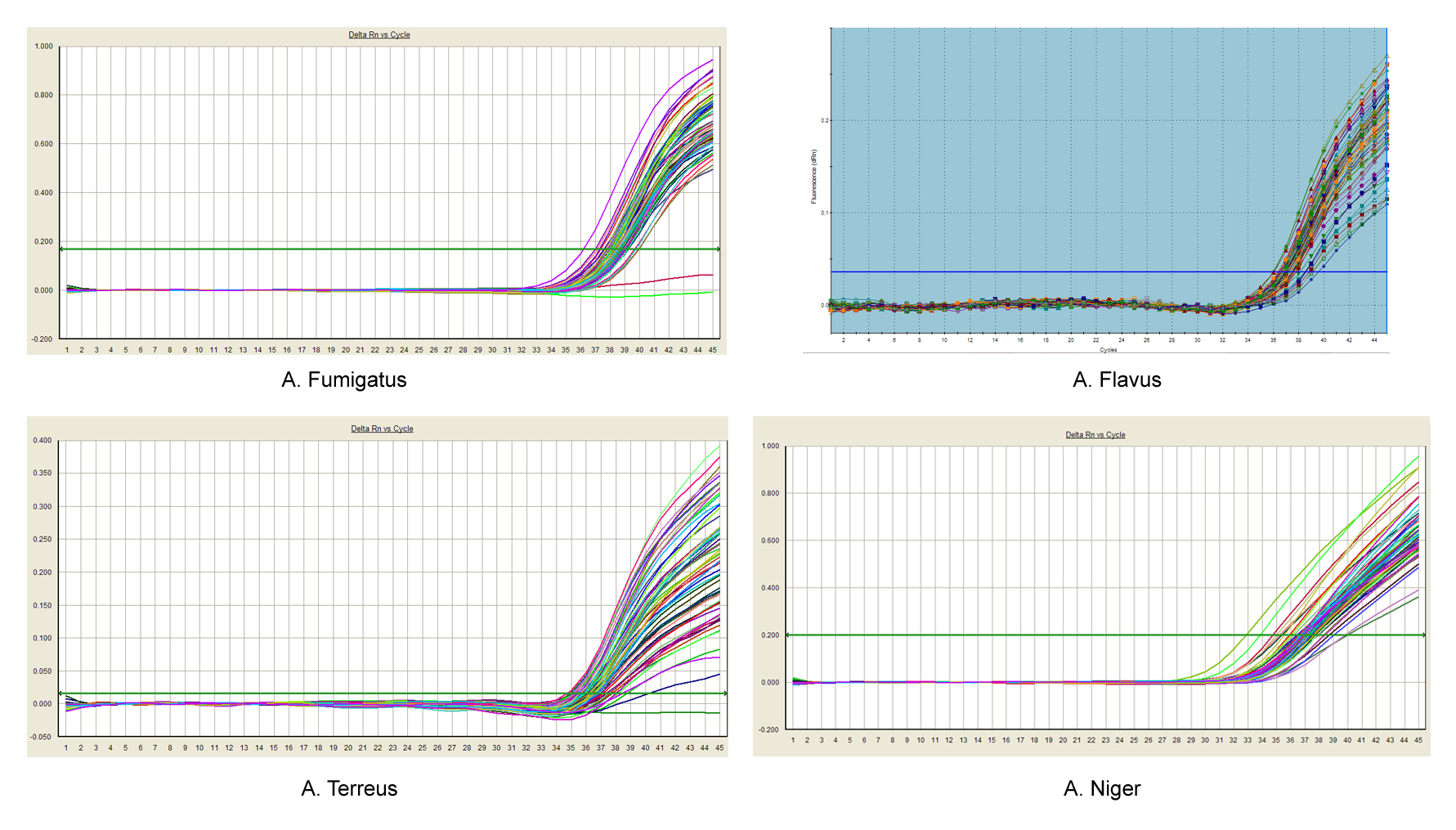 Primer and probe specificity are the limiting factors in establishing an FQ-PCR detection system for aspergillus and extraction of aspergillus DNA. FQ-PCR primers and probes select highly-conserved sequences of aspergillus as amplification target sequences to prevent high homologies with other bacterial, fungal, and human genes. The ITS sequence was the most highly conserved sequence for most fungi including aspergillus. Fungal species can be identified when high-specificity, designed primers and probes contain the ITS sequence, particularly, both ITS1 and ITS2.

Many studies have reported on the design of primers and probes for real-time FQ-PCR with this sequence [6-8]. In the instant study, primers and probes were designed using the ITS sequences. Problems for these designed probes were encountered. They were not conservative, the 5’ end was G, and the primer Tm value failed to meet certain requirements were three instances.

The primers and probes were synthesized for FQ-PCR detection to screen and obtain the primers and probes having high specificity and good curves. The FQ-PCR primers and four aspergillus DNAs served as the substrate for a common PCR detection. They were sent for PCR amplification product sequencing. Homologies between products and four aspergillus were compared. The results showed a higher homology (up to 90 %) between amplification products and four aspergillus gene fragments. This indicates no non-specific amplification product. The results of FQ-PCR detection system specificity, sensitivity, and repeatability testing show a high specificity, no cross-reaction with other fungal, bacterial or human genes. It also returns sensitivity with a concentration of up to 35 spores/mL, and a repeatability. CVs Ct values obtained from intra- and inter-assay repetitive experiments with SPSS19.0 were less than 5 % (0.37 % -3.53 %). This complies with National Standard Nucleic Acids Amplification Test Reagents (Kits) (YY/T 1182-2010) requirements approved by the CFDA on December 27, 2010 for implementation on June 1, 2012. This study used a DNA extraction method suitable for liquid-type specimens and established an aspergillus real-time FQ-PCR detection system with a high specificity and a good sensitivity and reproducibility. This provides a reference for molecular biology methods for the clinical diagnosis of aspergillus-caused illnesses.

This one-step combined heating method can be applied in liquid-type specimens. The experimental results obtained have been verified through a standard strain suspension with a good amplification curve in QD-PCR system. Other factors are present, such as enzymes, inorganic salts, other plasma components there are the factors influencing the buffer concentration and Taq enzyme activity in the PCR reaction system. This may result in a low mycelium and spore concentration collected in the alveolar lavage fluid. There are also a variety of infectious viruses, bacteria and other inhibitory factors which have effects that need accounting for. There may be other unknown substances that impact on the process. Therefore, there remains a level of uncertainty in the DNA extraction of clinical specimens of plasma and alveolar lavage. False negative amplification results may also occur. More clinical samples are needed for verification.

The primers and probes for the FQ-PCR detection system in this study were targeted at A. fumigatus, A. flavus, A. terreus, and A. niger. These are a wide range of common clinical fungi, but were tested separately. The same clinical suspect specimen should be tested simultaneously with four detection systems which are cumbersome. There are many species of aspergillus and each has also a variety of subspecies. There is no certainty that the specificity of a primer or probe adapts to other subspecies. It should be verified by a large number of samples to be collected. The real-time FQ-PCR detection system tested in this study for the diagnosis of clinical aspergillosis needs further testing using more clinical specimens.

We acknowledge the financial support from the Science and technology program of Department of Science and Technology of Hunan Province (Program No.: 2013FJ6028).