Background: Glioblastoma Multiforme (GBM) is a common malignant brain tumor. It is characterized by rapid growth and high tumor heterogeneity. The molecular mechanisms driving GBM tumorigenesis and progression are not yet fully elucidated.

Conclusion: miR-124, and miR-137, function as tumor suppressors to inhibit cell proliferation and differentiation and in GBM, their expression was significantly decreased.

A microRNA (miRNA) is a conserved, small, non-coding RNA molecule ( ~ 18-25 nucleotides long), which functions in the post-transcriptional regulation of gene expression by binding to the 3'-UTR of a target mRNA and causing subsequent cleavage, destabilization, and less efficient mRNA translation [5, 6]. As of 2016, over 1,000 miRNAs have been found in humans, and is proposed to target about 60 % of all genes [7, 8]. Neural differentiation is characterized with the expression of specific proteins, including Tuj1 and GFAP, which are essential for cytoskeleton and associated with cellular morphology [9, 10]. miR-124, and miR-137, overexpression results in changes in cell proliferation and differentiation [11]. Human β-Tubulin 3 is a structural protein (450 amino acid) expressed in neurons and is thought to be a neuron specific class III tubulin (Tuj1). It contributes to microtubule stability in neuronal cell bodies and axons [12]. The glial fibrillary acidic protein (GFAP) is an intermediate filament protein that expresses in numerous cell types of the central nervous system, including astrocytes and ependymal cells [13]. GFAP is involved in many important CNS processes, including astrocyte-neuron interactions, cell-cell communication, blood brain barrier function maintenance, and CNS injury repair [14, 15]. This study investigated miR-124, and miR-137, expression in GBM and their effects on proliferation and differentiation, and then examined Tuj1 and GFAP expression in GBM cells.

miR-124, and miR-137, expression levels in GBM tumor tissues and normal brain tissues were detected by using a Real-time RT-PCR. First, primers were designed based on an miR-124 and miR-137 sequence (GeneBank accession numbers: NR_0296 68, and NR_029679, respectively) (Table 1). RNA was extracted from tissues with an RNAprep Pure Tissue Kit. Real-time RT-PCR was performed by a Real-time PCR Amplifier (Bio-Rad) using an mirVanat qRT-PCR miRNA kit (Ambion) under the following reaction conditions: 95°C, for 3 min; 95°C for 15 s; and 60°C at 30 s for 40 cycles. U6 was used as a reference gene. Results were analyzed using 2-ΔΔCt [16].

Matured miR-124, and miR-137, sequences were used to establish an miR-124, and miR-137, overexpression system. The corresponding sequences with the same oligonucleotide sequences compositions were used as negative controls. miR-124, and miR-137, sequences were synthesized by the Nanjing Shengxing Company. After cloning the synthesized miRNA sequences into the pMIR-REPORT expression system (Ambion), the plasmid DNA with correct insertion WAS transfected into U251 glioma cells using INTERFERinTM Polyplus transfection reagents. THE U251 GBM cell line was purchased from the Cell Bank of the Chinese Academy of Science. Cells were cultured in an RPMI-1640 medium (HyClone) at 37°C and 5 % CO2 for 24 hrs after transfection. Cells were then subjected to further analysis.

Immunofluorescence was used to detect Tuji and GFAP expression levels in miRNA-expression-vector-transfected U251 cells. Logarithmic growth phase transfected cells were fixed with paraffin onto slides. After blocking, cells were incubated with mouse anti-human an Tuji and GFAP (1:2000) antibody for 2 hrs at 37°C, followed by incubation with a fluorescence-marked goat anti-mouse secondary antibody (1:1000) for 1 hr at 37°C. After washing with 1 × PBS and attaching cover slips to the slices, fluorescent staining was observed under a fluorescence microscope.

miR-124 and miR-137-transfected U251 glioma cells were grown to the logarithmic phase (24 hrs) and fixed with 90 % ethanol, overnight, at 4°C. After removing the ethanol, cells were incubated with RNase for 30 min at 37°C and cell nuclei were stained with PI. The stained cells were then subjected to a flow cytometry assay (Becton Dickinson) with an excitation wavelength of 488 nm and an emission wavelength of 630 nm. The FL-2 area, and DNA histograms, were analyzed by Modifit software. All experiments were repeated 3 times.

Results were analyzed using SPSS 20.0 and presented with a mean ± standard deviation. T test was used for comparative analysis. p < 0.05 was deemed as statistically significant. 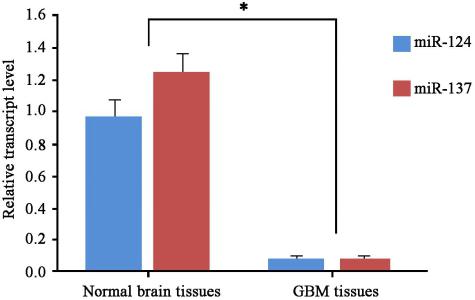 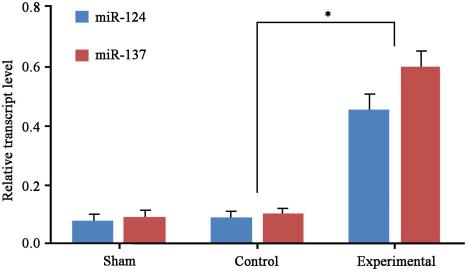 3.3 Immunofluorescence of Tuj1 and GFAP expression

miR-124, and miR-137, transfected U251 cells were harvested every other day. Tuj1, and GFAP, expression was detected by immunofluorescence staining (Fig. 3). Tuj1 was shown with GFP (a green fluorescent marker), GFAP with rhodamine (a red fluorescent marker). Tuj1 and GFAP cellular expression levels represent the degree of cell differentiation as specific proteins of the neuron system. With cell culture progression, Tuj1, and GFAP, expression gradually increased after miR-124, and miR-137, transfection. Phase contrast microscopy showed neuron-specific synapse structures in U251 cells after miR-124, and miR-137, overexpression, suggesting that the U251 cells differentiated into normal neurons.

U251 cells were transfected with miR-124 or miR-137 expression vectors. Tuj1 (green) and GFAP (red) expression was detected by immunofluorescence staining (400×). A time-dependent increase in fluorescence intensity (expression level) was observed.

The cell growth cycle was measured using the flow cytometry of miR-124, and miR-137, which had transfected, blank-controlled, and negative-controlled U251 cells. FL-2 areas were analyzed using Modifit software (Fig. 4A). Cell distribution in different cell cycle stages was analyzed using SPSS 20.0 software (Fig. 4B, 4C). No differences were observed between: blank, and negative, G0/G1 phase control cells; S phase; or G2/M phase (p > 0.05). miR-124, and miR-137, transfection significantly increased the number of U251 cells in the G0 / G1 phase and decreased the number of U251 cells in the S, and G2/M, phases (p < 0.05), suggesting that cell cycle was prolonged and mitosis attenuated. 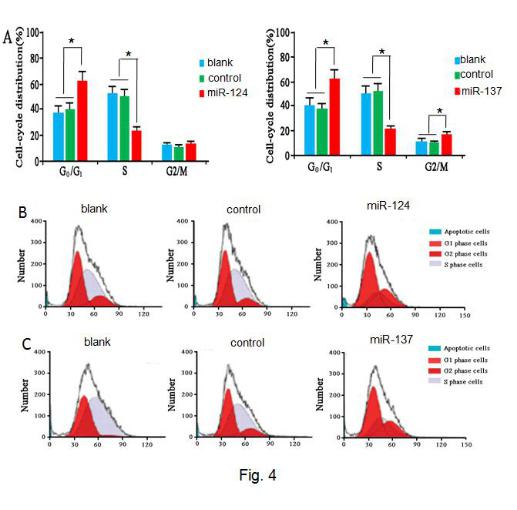 As a severe brain tumor, GBM threatens human health, making diagnosis of, and treatment for, GBM an issue of common concern in clinical scenarios [1]. The instant study proved that miR-124 and miR-137 expression significant decreased in GBM cells, thus providing evidence for clinical diagnosis. It was also found that miR-124, and miR-137, over-expression induced GBM differentiation. Given that differentiation therapy is currently of great interest to the tumor field, as it induces cancer cells to transform with normal morphology, gene expression and function [22], the findings of this study will contribute to an improvement in differentiation therapy.