Cancer chemoprevention is defined as the use of specific natural and synthetic chemical agents to reverse or suppress carcinogenesis and prevent the development of invasive cancers. Recently there has been a growing awareness that dietary non-nutrient compounds can have important Chemopreventive effects. Considerable work examining the cancer Chemopreventive effects of such compounds in animal models has been undertaken. A number of common medicinal plants have antioxidant properties and therefore may act as chemoprotector or radioprotectors. There is worldwide scientific interest in herbal based medicines to boost immune cells against cancer. By understanding the complex synergistic interaction of various constituents of anticancer herbs, herbal formulations can be designed to attack the cancerous cells without harming normal body cells.

Andrographis paniculata is known as “Kalmegh”. It has been used for centuries in Asia to treat gastrointestinal (GI) tract and upper respiratory infections, fever, herpes, sore throat, and a variety of other chronic and infectious diseases. It appears in the Indian Pharmacopoeia and is prominent in at least 26 Ayurvedic formulas. Studies have confirmed that Andrographis, properly administered, has a broad range of pharmacological effects, some of them are beneficial [1]. The stem and leaves of the plant, used medicinally, contains a large number of chemical constituents, including lactones, diterpenoids, diterpene glycosides, flavonoids, and flavonoid glycosides. Controlled clinical trials report suggest its safe and effective for use in reducing symptoms of uncomplicated upper respiratory tract infections. A hydroalcoholic extract of Andrographis paniculata possesses antioxidant activity against oxidative alterations in the myocardium and confer significant cardio protection by facilitating normal cardiac function [2]. Compounds were isolated from chloroform and methanolic extract of Andrographis paniculata possess cytotoxic activity against cancer cell lines Hep G2, HCT-116 with MTT assay [3]. Antimicrobial activity against eleven bacterial strains by ethanol extract of the aerial part of Andrographis paniculata have been reported [4].

A purified extract and andrographolide have been reported to decrease blood glucose, triglyceride, and LDL levels when compared to controls. No changes were observed in the serum cholesterol or body weight of rats. Metformin has also shown similar effects in these parameters [5]. Andrographis paniculata Antiulcer activity was reported in cyst amine induced duodenal ulcer model in rats [6]. Andrographis paniculata antioxidant and hepatoprotective effect on acetaminophen (Paracetamol) induced hepatotoxicity in albino rats are also reported [7]. An andrographolide was reported to induce apoptosis in TD-47 human breast cancer cell line in a time and concentration-dependent manner by increase expression of p53, bax, and caspase-3 and decrease expression of bcl-2 determined by immune histochemical analysis [8]. Andrographis paniculata, dry leaf powder when fed orally to male albino rats, at a dose level of 20 mg per day for 60 days was reported to spermatogenesis cessation, cessation of degenerative changes in the seminiferous tubules, Leydig cells regression and regressive and/or degenerative changes in the epididymis, seminal vesicle, ventral prostate and coagulating gland [9]. An intraperitoneal injection of an ethanol extract of the aerial parts (25 g/kg body weight) in to mice poisoned with cobra venom delayed respiratory failure and death. These data suggest that extracts of the aerial parts do not modify the activities of the nicotinic receptors but produce significant muscarinic activity, which accounts for its antivenom effects [10]. Many of the conditions commonly treated with Andrographis paniculata in traditional medical systems are considered self-limiting, which requires purported benefit in cancer treatment.

The croton oil, 7, 12 - Dimethylbenz (a) anthracene (DMBA), purchased from Sigma Chemicals Co. (St. Louis, MO. USA). Other chemicals were obtained from local firms and were of the highest purity. DMBA was dissolved in acetone at a concentration of 104 μg /100 μl . Croton oil was diluted in acetone to give a 1 % dilution.

Plant material (Andrographis panniculata) was collected locally and identified and the specimen was authentified by the Department of Botany, Safia College, Bhopal (MP), India. Bark was washed, air dried, powdered and extracted separately using 50 % methanol and a separating funnel.Extract thus obtained were vacuum evaporated into powder.. These extract was again dissolved in DDW immediately prior topical application.

The dorsal skin on the animal’s back was shaved 1 day before the experiment commenced .Only animals in the hair cycle resting phase were chosen . Two stage protocol initiated by a single topical application of a carcinogen (7, 12 - dimethylbenz (a) anthracene (DMBA) and then followed by a promoter (croton oil) twice in a week were employed per Berenblum [11] as standardized by Agrawal et al., [12] ) used to induce tumours. Animals were randomly allocated into 7 groups of comprising six mice each. The treatment was provided topically to the shaved area

Group 2 (Vehicle control): Twice a week administration of 100 μl acetone up to 16 weeks.

Group 5 (Andrographis panniculata Extract Alone): - Twice a week application to skin at the dose of 500 mg/kg b. wt up to 16 week.

All animals groups were observation for gross and microscopic skin changes weekly during the 16 weeks of experimentation period. All mice were weighed and examined for skin papillomas and results were recorded. The following parameters were considered.

Tumor incidence: The number of mice at least one tumor expressed as percent incidence.

Tumor yield: The average number of papillomas per mouse.

The antibacterial activity of a hydro-methanolic extract from leaves of Andrographis panniculata was investigated using a Disk diffusion method given by Kerby-Bauer.

Bacterial strain:Following gram negative and gram positive bacterial strain i.e. and E.coli, Klabsella, Staphylococcus and Pseudomonas were used for the Antibacterial activities which were received from stock culture of our laboratory.

Media: Nutrient agar broth media were used for the antibacterial activities. Nutrient broth is prepared i.e. 1.3g in 100ml of double distilled water, poured in 6 different test-tubes and added 4 bacterial strain in each test-tube. Nutrient Agar media prepared poured in Petriplates after solidifying swab the bacterial cultures on the plates and allowed for incubation at 370C for 24 hrs.

Study parameter: Measurement of Zone of Inhibition (In mm)

Anti-oxidant activities of Gymnema sylvestre extract (10-100 μg/ml) were determined according De-oxyribose method (Fenton reaction) of Halliwell and Aruoma [13]. The hydroxyl radical attacked to de-oxyribose and initiated a series of reaction that eventually resulted in the formation of thiobarbeturic acid reaction substances (TBARS). Ascorbic acid= 1mg in 1ml,

The study’s findings depicted in Tables I. Animals of Group- VI (control) in which a single topical application of DMBA, followed by croton oil produced skin papillomas, which began appearing in the started 5th week. Papilloma incidence in DMBA/croton oil treated mice (carcinogen control) reached 100 % by the endof the experiment (16 weeks). 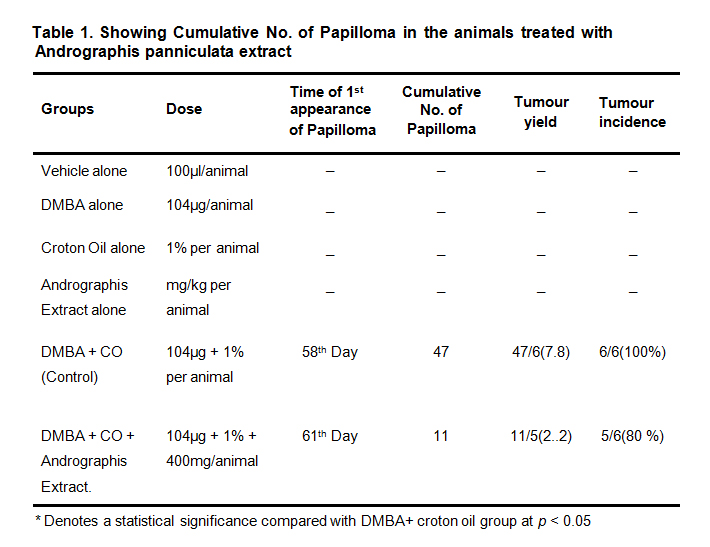 Table 1. Showing Cumulative No. of Papilloma in the animals treated with Andrographis panniculata extract

Andrographis panniculata leaves at the different concentration (25 %, 50 %, 75 % and 100 % exhibited antibacterial activity against and E. coli, Klabsella, Staphylococcus and Psuedomonas (Table 2).

Andrographis panniculata leaves in vitro antioxidant activity was tested in various concentrations against ascorbic acid as the standard. Percentage of TBARS was calculated for both ascorbic acid and Andrographis panniculata extract, with the help of formula, for a comparative study. TBARS percentage was calculated and plotted in the graph in different concentration (Table 3). 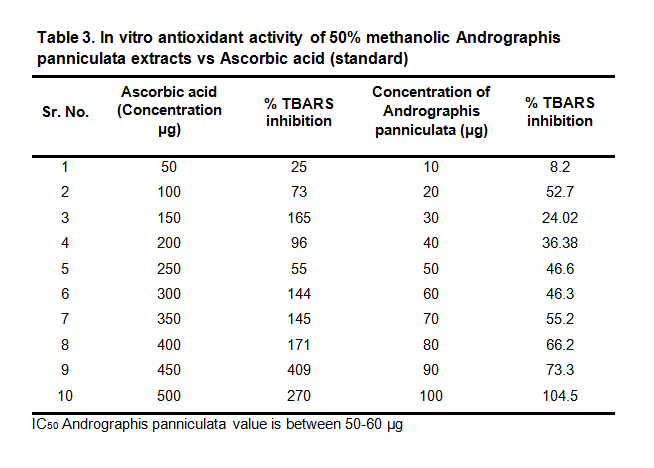 Chemoprevention is currently an important strategy for controlling of cancer induction. There is a need to explore medicinal plants or other natural agents that may be work as chemopreventive agents. The current study demonstrates a chemopreventive potential for andrographis panniculata extract for DMBA-induced skin tumorigensis in male Swiss albino mice. Skin carcinogenesis model in experimental animals has been found to be a useful when for investigating the chemopreventors influences both mechanistically and operationally [15]. The present study demonstrats that a topical application of andrographis panniculata extract (500 mg/kg body weight) at the pre promotion phase shows a significant reduction in tumor incidence, tumor burden, tumor weight, tumor size, and cumulative number of papillomas in andrographis treated groups relative to the carcinogen treated control. No androgrphis panniculata anticarcinogenic activity has not been well documented. Evidence has accumulated suggesting that this may be due to a reactive oxygen species. which play an important role in tumor initiation/promotion by enhancing or facilitating the metabolic activation and/or initiating effects of carcinogens [19].. The plant extract may have inhibited the DMBA metabolism to its active form, delayed the carcinogenesis promotion phase or down regulated reactive oxygen species formation. [16-18]. There are few reports on the cytotoxic and antiproliferative effects of Andrographis. paniculata up on in vitro cell lines [8, 13, 14]. Andrographolide, a Andrographis panniculata compound was also reportedly induced apoptosis in a TD-47 human breast cancer cell line in a time and concentration-dependent manner. It also increased expression of p53, bax and caspase-3 and decreased bcl-2 expression as shown by immunohistochemical analysis was observed [8]. The anticarcinogenic activity of andrographis panniculata in skin papilloma model in Swiss albino mice was observed. The antibacterial and antioxidant effect of andrographis panniculata was also observed an in vitro model. The present study suggests that Andrographis . panniculata may be an important drug in traditional medicine to treat various ailments.

The authors are thank the M. P. Council of Science and Technology, Bhopal for its financial assistance for the above work.