Objective: To investigate any correlations between TGF-β1-509C/T gene polymorphisms and primary knee osteoarthritis (PKOA) to obtain new new understanding PKOA pathogenesis and new methods for the diagnosis, and treatment of PKOA.

Primary knee osteoarthritis (PKOA) is a common and frequently occurring disease in osteoarthropathic surgeries. Its incidence tends to constantly increase. It has become a chronic disease that seriously harms the health of the middle-aged and elderly [1]. Its etiology, mechanisms, prevention, and treatment has been intensively studied. The pathogenic mechanisms remain unclear and onset is not easily detected [2]. PKOA generation and progression is caused by the synergy of several factors including: local, genetic, environment, and others [3, 4]. This study focuses on correlations between TGF-β1-509C/T polymorphisms and Hunan region PKOA patients to open up a new field for the treatment of PKOA.

Eighty-eight PKOA patients (43 mild, and 45 severe, cases) who had been diagnosed either as outpatients, or, inpatients at the Department of Orthopedics of the Affiliated Hospital of the Hunan Academy of Traditional Chinese Medicine between May 2013 and September 2014 were selected randomly. There was no consanguinity. It included 32 male, and 56 female, patients, aged 47.5 ± 8.3 years old. Inclusion criteria were: 1) Patients with clinical symptoms meeing the Guide of Chinese Orthopaedic Association of Chinese Medical Association on the Diagnosis and Treatment of Osteoarthritis (2007) standards. The Kellgren-Lawrence (K-L) X-ray five level grading criteria for osteoarthritis was employed [5]. Using clinical symptoms in combination with knee x-ray K-L criteria, meeting levels 0, I, or II standards were typed as mild PKOA; levels III, or IV, were typed as severe PKOA; 2) Patients without secondary knee osteoarthritis; and, 3) Patients without hypertension and diabetes and liver and kidney dysfunction. Eighty-nine patients who, afer a physical examination, manifested no PKOA clinical symptoms physical and knee x-ray examination shows no abnormalitites, during same period (May 2013-September 2014) were selected randomly as the healthy control group. This 28 male, and 61 female, patients, aged 48.8 ± 7.5 years old.

Fasting, peripheral venous blood samples of 2 ml were taken from each subject in the early morning. The samples were treated with an anticoagulant EDTA-Na2 and stored at 4°С. Genomic DNA was extracted within a week. If genomic DNA was not extracted within a week, the samples were stored at -20°С. Genomic DNA extraction from the peripheral bleed was performed in accordance manufacturer’s instructions. Gene sequences were found in the NCBI database (rs1800469). The PCR primer was designed using software Primer 5.0 (sequence of forward primer: 5'-GCTACGGCGTGGAGTGCTGA-3'; sequence of reverse primer: 5'-AGAGGACCAGGCGGAGAAGG-3') [6].

The statistical analysis was performed by statistical software SPSS13.0. The Hardy-Weinberg equilibrium, genotype, and allele, frequencies were compared using the chi -square test and relative risk was represented with the odds ratio (OR) and 95 % confidence interval (CI). p < 0.05 indicates a statistically significant difference.

Three genotypes were selected randomly and sequenced. The sequenced results were completely consistent with the electrophoresis results (Fig. 2). 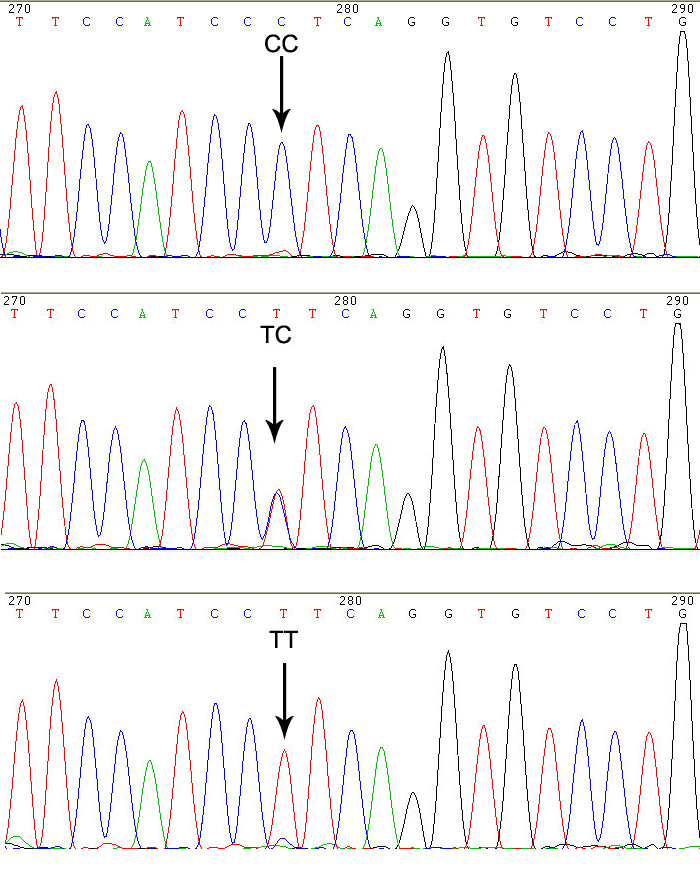 Testing showed that the distribution of TGF-β1-509 genotypes in both the PKOA, and the control, groups complied with the Hardy-Weinberg equilibrium law (χ2 = 0.135, p = 0.934; χ2 = 2.190, p = 0.335, p > 0.05), indicating that a representative population was used. The PKOA group had a distribution difference between genotype and allele frequency compared to the control group.

OA incidence is a complicated, pathological process. Current PKOA research focuses on cartilage and synovium. Cytokines affecting cartilage, and synovial, cells include growth factors, chemokines, interleukins, and tumor necrosis factors. TGF-β plays an important role in OA osteophytes and synovial hyperplasia. TGF-β1 is in the TGF-β superfamily and plays an important role in cartilage growth and reconstruction. It is an important PKOA-associated gene. Studies have shown an association between the single nucleotide polymorphism (SNP) locus of the TGF-β1 gene and OA. But research results are not uniform. Youcheng Wang [7] found that the TGF-β1 C1348-T locus polymorphism significantly associated with PKOA. A common variation in the population of China occurs at -509C/T, and correlation studies of the -509C/T locus and PKOA have not been reported outside China.

A correlation analysis was performed in this study. The subjects were two populations selected from a PKOA group and a control group, with the same, or very similar, genetic makeup. The purpose was to compare allele frequency differences in certain candidate gene polymorphisms between the two populations. Correlation analyses should show that the allele frequency distribution in the PKOA group will be significantly higher than that in the control group, if certain alleles, or its adjacent locus, are associated with disease susceptibility. PKOA group allele frequency should be significantly lower than that the control group if it relates to disease resistance and protection. Experimental results showed genotypic frequency, and allele distribution, differences between the PKOA group and healthy controls. CC genotypic frequency in the PKOA group was higher than that in the control group (44.3 % vs. 13.5 %). The C allele frequency was higher than in the control group (65.9 % vs. 41.6 %), with the difference being statistically significant (p < 0.05). Logistical regression analysis results showed that, compared to the allele T-carrying population, the allele C-carrying population risk for PKOA is 2.72 times greater (OR = 2.72, 95 %, CI = 2.57 - 2.88). This suggests that the -509 allele C in the TGF- β1 promoter region may be a PKOA involved gene and that allele T may be a protective gene. This may relate to: why the change of allele C towards allele T increased TGF- β1 translation, and expression, levels; inhibited immune cell activation; and, increased osteoarthritis resistance [8]; or why greater TGF-β1 expression mediated cartilage synthesis; inhibited collagen, and proteoglycans, decomposition; protected the cartilage matrix from hydrolyzation, and protease, damage and achieved cartilage damage reversal [9, 10].

Jing Guo, et al. [11] found that cartilage, and synovial, cell apoptosis in the OA group negatively correlated with TGF-β1 expression, high TGF-β1 high expression in the OA group may negatively regulate cartilage, and synovial, cell apoptosis generation, and delay osteoarthritis onset and progression. Ming Chen, et al.. [12] found that knee osteoarthritis (KOA) patient synovial fluid TGF-β1 levels were significantly negatively correlated with KOA stages. KOA patient synovial fluid TGF-β1 levels at the middle and advanced stages was significantly lower than that in the control group (p < 0.05). Compared to the healthy control group, early-stage KOA patient synovial fluid TGF-β1 levels werenot statistically significant (p < 0.05). TGF-β1 might protect, and repair, osteoarthritis and it was a measure for disease severity. This study divided PKOA was into mild and severe. The experiments concluded that the differences were not statistically significant comparing genotype and allele frequency of the two groups. The -509C/T gene polymorphism was not associated with PKOA severity.

The differences in the findings may relate to the sample quantity and size, different regions, ethic groups, and studied-population genetic heterogeneity PKOA is a complicated pathological process involving multi-gene inheritance. Genetic heterogeneity, environmental factors, synergy between genetic factors, and other complicated factors might affect PKOA and warrant further study.