Influence of Self Motivation on Mental Health of Elderly People

Objective: To study the influence of self-motivation characteristics on the mental health of the elderly.

Methods: Life Satisfaction Rating Scales A (LSRA), UCLA Loneliness Scale, and the Mandala Painting Method (MPM) were used to assess 189 elderly people in the Home for the Aged Guangzhou. The mean age was 65.32 years.

Results: a. The self-motivation of the elderly gives priority to the integration stage (35 %) and the protection stage (23.3 %); b. Elderly women have a significantly greater life satisfaction, Mandala integration feature, transcendental characteristics and a significantly lower loneliness scores than elderly men; c. Regression analysis shows that peaceful moods occurring during painting can explain 11 % of the life satisfaction, while an increased peripheral color and a focused moods during painting may explain 26 % of the loneliness.

Conclusion: Self-motivation characteristics affect the mental health of the elderly.

Psychoanalysis contends that engaged, and calibrated, self-motivation is the core factor affecting mental health [4]. Self is the central concept in psychoanalytic theory and Jung posited the self as organizing and coordinating personality [5]. The self is composed of self-motivation, emotional experience, and self-image [6]. Disorders of these self functions greatly affect individual mental health. People experience anxiety, depression, and other negative emotions when their self-motivation is dysfunctional, while smooth performance allows for more positive emotions [6].

Is there empirical support for the psychoanalytic hypothesis that mental health can be influenced by self-motivation? Answers to this question has theoretical significance for analyzing any models of mental and pathological theory and also practical value for elderly mental health evaluation and treatment. This study aims to examine relationships between self-motivation and elderly mental health via the MPM, including: what are the stages of self-determination in the elderly? Are there any gender differences in self-motivation characteristics? Does the MPM predict loneliness and life satisfaction in the elderly?

The LSRA was developed by Edward Dana in 1980. It has 20 questions and uses scoring method of 0, 1, and 2. The higher the LSRA score is, the higher the life satisfaction is. Scorer reliability was 0.78 for our subjects.

The UCLA loneliness scale was developed by Russell. It has 20 questions and uses A four-level scoring method. The higher the score, the more pronounce loneliness will be. Internal consistency was 0.89 and retest reliability was 0.73 for our subjects.

Mandala templates representing six motivation stages of the self were selected from 173 mandala paintings in “The Road of Mind – Self-Healing Picture Book” by Canrui Chen [7], and Yanhong Gao. These templates purport to accurately reflect the stage of self-motivation of the painters.

A Mandala Characteristic Scale (28 questions) prepared by Canrui Chen [4] was used. It was analyzed using a five-level scoring method and mandala characteristics were analyzed based on painting structure, color, line, image, and painting emotions. The scale was divided into five “sense of” factors: security; order; coherence; integration; and the sacred. The higher score the score the stronger is painter’s self-motivation.

A one-to-one testing method was used. Subjects were required to first complete the LSRA and the UCLA loneliness scale and then perform the Mandala Painting test. This test consisted of the subjects randomly selecting one of the six Mandala templates and paint it freehand while writing down their thoughts while painting. The Mandala Characteristic Scale was completed by the tester according to the Mandala works and the subject’s feeling while producing the painting as well as thinking associated with the painting after the subject had finished. The testing process lasted approximately 60 minutes. Painting analysis were performed by licensed psychoanalysts who had received Mandala paintings analysis training.

3.1 Self Stage and Naming Characteristics of the Elderly

The self stage and nomination of Mandala works of the subjects appear in Tables 1 and 2. The studies showed that subject self-motivation gave priority to the following stages: integration (35 %), protection (23.3 %), and condensation stage (15 %) in the self-determination phase. The surmounting stage accounted for only 5 %. In the Mandala works naming phase, subjects identified the works with flowers (30 %), stars (21.7 %) and the sun (13.3 %). 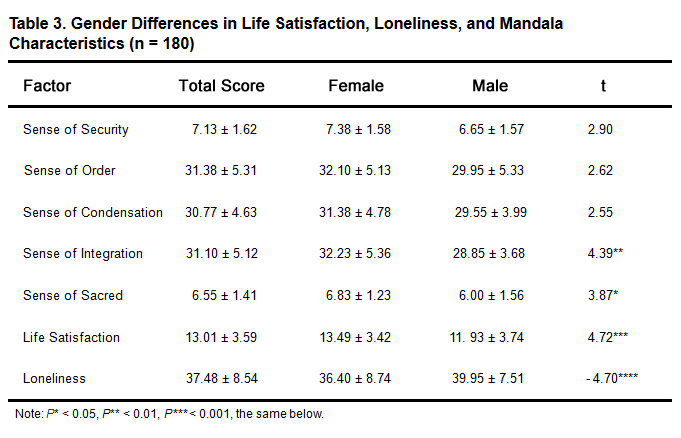 A stepwise regression analysis was performed by taking life satisfaction and loneliness as the dependent variable and Mandala painting features as the independent variable to further study the influence of the self-motivation on life satisfaction and loneliness of the elderly, the analysis results appear in Table 5 and Table 6.

4.1 Self Motivation Characteristics of the Elderly

The results show that the self stage of the elderly gives priority to the following stages: integration (35 %); protection (23.3 %); and, condensation (15 %). A higher proportion of self-motivation in the integration and protection stages suggests that a majority of the elderly focus their attention on coordinating conflicts and pursuing a sense of security. This result is identical to the findings of Min Li, et al. [14] that somatization, anxiety, and interpersonal sensitivity of the elderly was significantly higher than those in the normal templates in China. It found, in interviews, that the elderly often deal with complex relationships at the integration stage, such as, relationships between mother-in-law and daughter-in-law, inter-generational education, voluntary admission a home or institution for the elderly, and the like. These intense contradictions and conflicts arise in the collision of of traditional culture and modern civilization. Interviews found that death anxieties at the protection stage were more significant. The elderly people are also less likely to be at the surmounting stage (5 %), which is possibly due to the the fact that self-transcedence requires greater mental effort. The elderly are more inclined to enjoy a peaceful old age than one involving struggle and conflict.

The elderly selected Mandala works containing flowers (30 %), stars (21.7 %), and the sun (13.3 %). Blooms represent plant fecundity and symbolizes the protection stage of the self [15]. This is consistent with the finding of the elderly are mainly with the protection stage. Both the elderly people and students usually select Mandala works containing stars and the sun [11]. Jung argued that the ego and self relationship could be expressed by the metaphor of the earth and the sun. The sun and stars are common Mantra images [16].

4.2 Gender Difference of Mandala Painting Characteristics, Life Satisfaction and Loneliness of the Elderly

Elderly women have higher life satisfaction and less loneliness than elderly men. Is this situation related to self-motivation? Gender differences in the characteristics of Mandala works was examined to investigate this issue.

The results showed that elderly women had a significantly higher sense of integration and sense of the sacred in the Mandala painting works. Further analysis found that elderly women had a significantly higher integration in the pictures of Mandala works, such as, harmony and integrity, image internal/external connection, balance of cool/warm colors, and the fitness of image and color and other items, and included a higher transcendence [sense of the sacred] feature in religious images and other items. (p < 0.01) These items reflect that the elderly women are more prone self-motivated in terms of integration [14]. In daily life, they are better at coordinating relations and contradictions and get beyond predicaments via faith.

4.3 Relationships between Mandala Painting Features and Life Satisfaction and Loneliness

In summary, the results of this study show that self-motivation has a significant influence on the mental health of the elderly, including life satisfaction and loneliness.