Background: Previous studies have shown that Helicobacter pylori infection (HPI) is related to a reduced risk of esophageal adenocarcinoma (EAC) by unknown biological mechanisms. It is hypothesized that EAC and HPI have strong genetic associations.

Results: Genes linked to HPI and EAC present significant overlap (79 genes, p-value = 2.5E-75) and play roles within multiple common genetic pathways (enrichment p-value ≤ 5.05E-17 for the top 10 pathways) that are implicated with both diseases. A genetic network of 32 genes was identified through which HPI may exert influence on EAC. There were 6 HPI genes that presented significant differences (p-value < 1e-10) between EAC cases and controls, including: MUC13, AQP3, TFF3, SFTPD, NOD2, and PIGR. Network analysis showed that these genes demonstrated strong functional associations with EAC and may be potential EAC risk genes.

Conclusion: Results from this study support the hypothesis that complex genetic associations exist between HPI and EAC, and that HPI-related genes may also play roles in EAC pathogenic development. This provides new insights into EAC candidate gene identification.

Esophageal adenocarcinoma (EAC) is a rapidly increasing incidence, high-mortality cancer in developed countries [1]. Studies suggest that at least 95 % of EAC cases arise from a metaplastic condition known as Barrett's esophagus [2]. Genetic studies using genome-wide association study (GWAS) and GED have been conducted to explore the genetic risks associated with EAC [3, 4]. Hundreds of EAS-linked genes have been reported. The basic carcinogenesis mechanisms underlying EAC clinical outcomes remain unclear. Genetic associations between Helicobacter pylori infection (HPI) and EAC were studied here in order to better understand the genetic bases of EAC, and identify novel potential genes for it.

Helicobacter pylorus is a gram-negative bacillus usually found in human gastric mucosal epithelium. Affecting over half of the world's population, HPI is a cause of gastroesophageal reflux disease (GERD) and a risk factor for GC [5]. HPI seems to associate with a reduced EAC risk. People with HPI have a greater than 40 % lower incidence of EAC than those without [6, 7]. Biological explanations for this HPI protective effect in the case of EAC remains unclear. It is believed that the reduced risk may be linked to lower gastric acid levels in HPI patients [7, 8].

In recent years, the Pathway Studio ResNet database has been widely used to study modeled-relationships between proteins, genes, complexes, cells, tissues, and disease [9]. This study integrated large-scale ResNet relation data and gene expression data to test the hypothesis that HPI and EAC share a genetic base, and that HPI-related genes may also associate with EAC. The results support the HPI-EAC correlation hypothesis and may identify potential novel risk genes for EAC.

Disease-gene relation data for HPI and EAC were acquired from the Pathway Studio ResNet relation database. It has been widely used to study modeled relationships between proteins, genes, complexes, cells, tissues, and diseases (http://pathwaystudio.gousinfo.com/Mendeley.html). It is updated weekly and is the field’s largest database [10]. In addition to the complete gene lists of genes, supporting references for each disease-gene relation appear in Supplementary Tables S1 and S2, and include reference titles and the related sentences where these relations were identified. This information could be used to located detailed descriptions of how a candidate genes relate to HPI and/or EAC.

A gene expression data set (GSE13898) of 92 subjects was used to test genes related to HPI which have not been reported to associate with EAC. This was to identify potential EAC risk genes.

The gene expression profiles acquired from 64 primary esophageal adenocarcinoma, 15 Barrett's esophagus, and 28 surrounding normal fresh frozen tissues were used for the microarray. All tissues were obtained after curative resection following pathologic confirmation at the University of Texas MD Anderson Cancer Center (MDACC). Microarray experiment and data analysis were done in the Department of Systems Biology at MDACC. Raw and processed data were deposited in NCBI GEO Datasets, which are available online at https://www.ncbi.nlm.nih.gov/geo/query/acc.cgi?acc=GSE13898.

A network analysis between 6 target genes and EAC was performed to identify any entities that could act as a bridge connecting the gene and EAC. This was done to validate potential candidate EAC risk genes. Target entity analysis included proteins/genes, small molecular/drugs, and functional classes. The relation data between these target entities and the 6 target genes and EAC were acquired from Pathway Studio ResNet database for analysis.

A systematic analysis of the HPI-Gene and the EAC-Gene ResNet relation data to identify genes associated with HPI and EAC was conducted. Results showed that 276 genes associated with HPI. This is supported by 720 scientific references between 1992 and June 2016 (Supplementary Tables S1a and S1b). For EAC, 293 genes, supported by 700 references between 1993 and June 2016 (Supplementary Tables S2a and S2b) were identified. A significant overlap of 79 genes between HPI-genes and the EAC-genes (Right tail Fisher’s Exact test, p-value = 2.5E-75), as shown in Fig. 1 (see Supplementary Tables S3a and S3b for the gene list and references) exists. 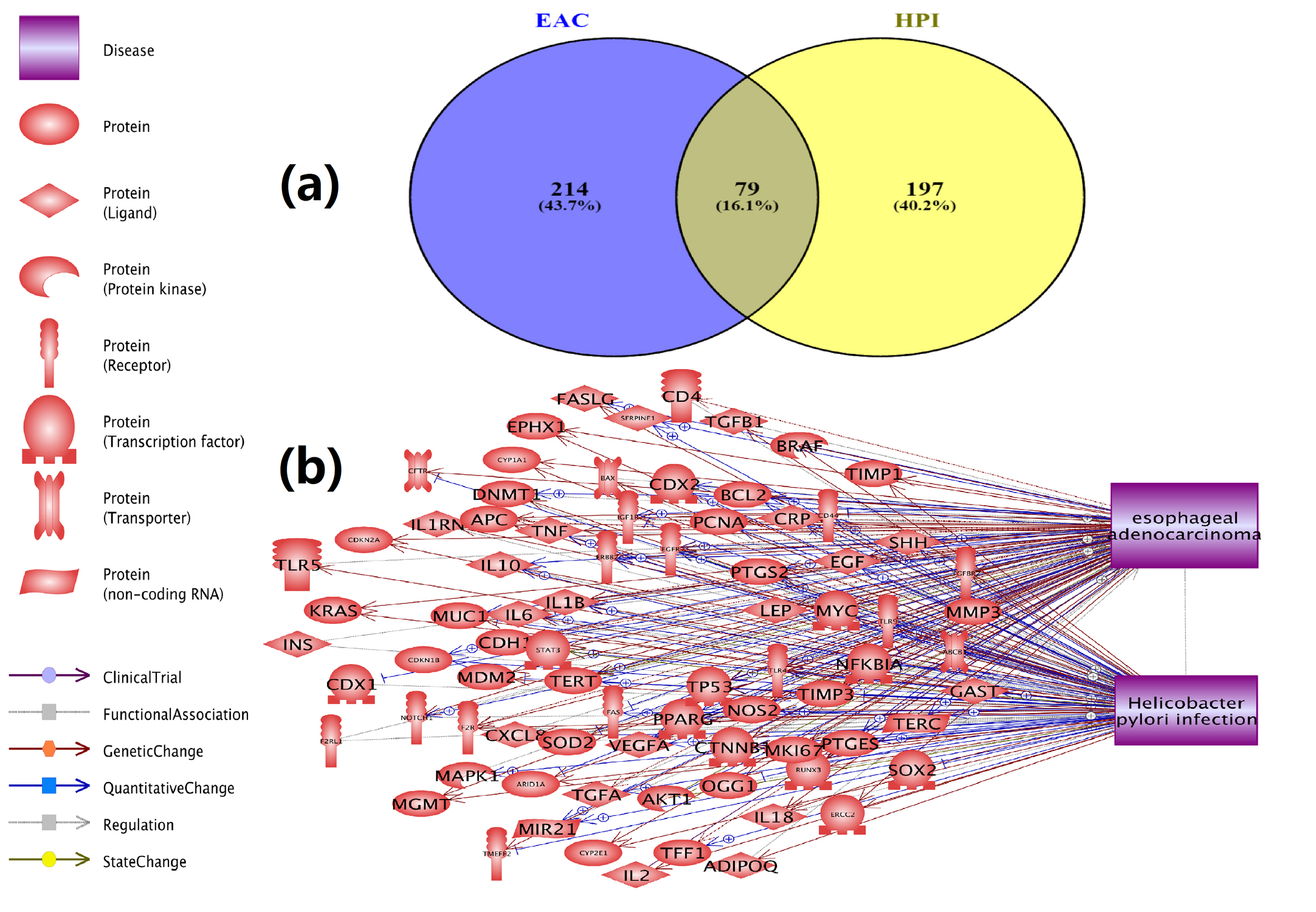 (a) Venn diagram for HPI-genes and EAC-genes; (b) The 79 genes linked with both HPI and EAC.

A Pathway Enrichment Analysis (PEA) using Pathway Studio was conducted to test the functional profile of the 79 genes associated with both HPI and EAC. 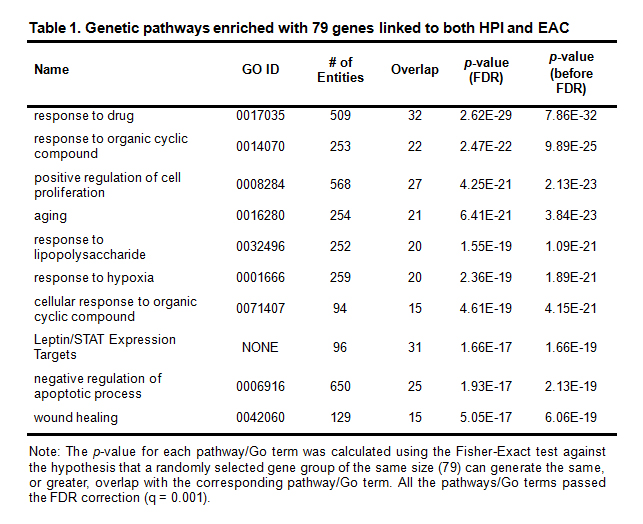 Table 1. Genetic pathways enriched with 79 genes linked to both HPI and EAC

Note: The p-value for each pathway/Go term was calculated using the Fisher-Exact test against the hypothesis that a randomly selected gene group of the same size (79) can generate the same, or greater, overlap with the corresponding pathway/Go term. All the pathways/Go terms passed the FDR correction (q = 0.001).

The results suggest that HPI and EAC share multiple genetic pathways. It is through these shared pathways that a large number of genes play roles affecting the pathogenic development of both diseases.

3.2 Possible co-regulations between HPI and EAC

Further functional network analysis, using PS, showed that, 32 of 79 genes are downstream targets of HPI (influenced by HPI), while also being an EAC upstream regulator (Fig. 2). HPI may influence EAC pathogenic development through the regulation of these 32 genes. For each relation (shown by an arrow) in Fig. 2, there is support from one, or more, references (Supplementary Table S3b), which could be used for a detailed description of each relation.

Networks were generated using the ‘network building’ module of Pathway Studio. The definition of the entity types and relation types in the figure can be found at http://pathwaystudio.gousinfo.com/ResNetDatabase.html

The results suggest that any gene linked to HPI may be worthy of study for its potential relation to EAC. These genes affect the HPI pathogenic development, which in turn may influence the disease status of EAC.

The ResNet relation data analysis showed that more HPI genes were not linked to EAC than these were (197 vs. 79; see Fig. 1). A gene expression analysis was conducted to study expression differences between EAC cases and controls for these 197 genes in order to identify those linked to HPI which were also potential EAC risk genes. Fig. 3 provides the ‘–log10’ transferred p-values (q = 0.001 for FDR) of each gene.

Fig. 3 The p-values for the 197 HPI genes for EAC case/control expression comparison.

The p-values have been through FDR correction with q=0.001 and logic transformation using ‘–log10’. The six genes demonstrating significant differences (p-value < 1e-10) appear at their corresponding positions.

In the gene expression analysis, 62 of 197 HPI genes passed the FDR correction (q = 0.001. See Supplementary Table 5). Six genes presented a significant difference (p-value < 1e-10) between EAC cases and controls. These were: MUC13, AQP3, TFF3, SFTPD, NOD2, and PIGR. According to the PS ResNet database, these 6 genes presented no direct relation with EAC in that there was no reference reporting an association between these genes and EAC. However, they demonstrate strong indirect linkage to EAC, bridged by 29 genes/proteins, 10 small molecular, and 7 functional classes (see Fig. 4). The 46 entities and the 141 relations with 1,385 supporting references in Fig. 4 appear in Supplementary Table S5a and S5b, respectively. 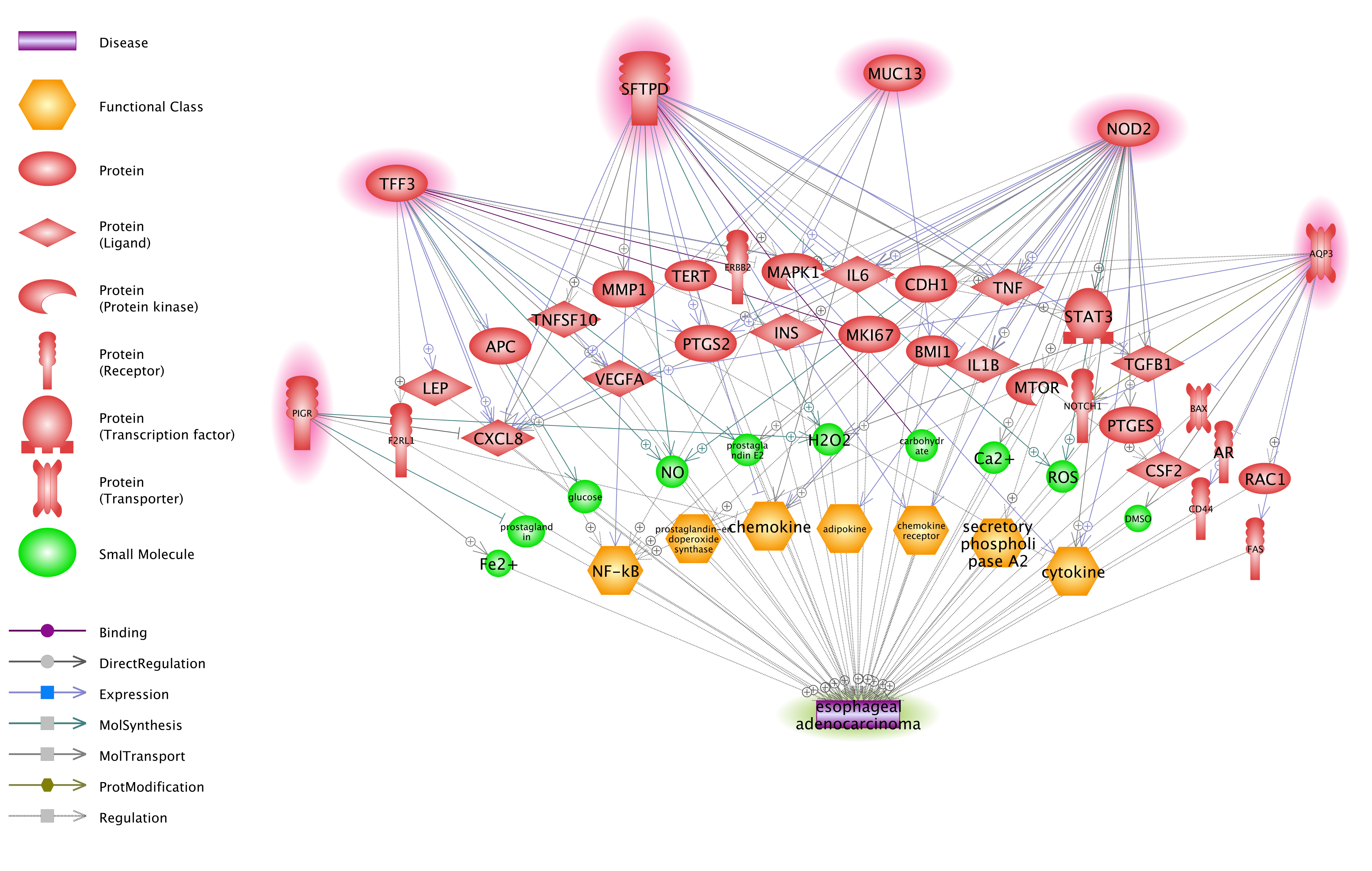 The network was constructed with ‘network building’ module of Pathway Studio.

A 32-gene network was discovered through which HPI may affect the disease status of EAC (Fig. 2). These findings provide further support for the hypothesis that HPI genes may regulate EAC pathogenic development.

A closer study of the 197 HPI only genes (Fig. 1 (a)) using EAC gene expression data showed that a large portion (62/197 = 31.47 %, q = 0.001 for FDR) of these HPI genes also demonstrated differences between EAC cases and controls (FDR corrected p-value < 0.001) (Fig. 3). Six genes were identified as potential EAC markers (FDR corrected p-value < 1e-10), including: MUC13; AQP3; TFF3; SFTPD; NOD2; and, PIGR. Further validation using a ResNet network analysis showed that these six genes presented strong indirect correlation with EAC forming a functional genetic network supported by 1,385 supporting references (Fig. 4). Through this network, multiple pathways could be identified through which a gene may affect EAC disease status. One example, NOD2, has been reported to be involved in the production of microbicidal reactive oxygen species (ROS) [20], which play an important role in EAC development [21]. This finding supports a NOD2 → ROS → EAC pathway. Another possible MUC13 → EAC pathway was identified. MUC13 has been shown to regulate chemokine secretion [22]. Chemokine receptors are Class A GPCRs coupled with Gαi heterotrimeric G proteins and play a pivotal role in EAC tumorigenesis and metastasis [23]. By regulating chemokine secretion, MUC13 may regulate EAC pathogenesis through a chemokine pathway which would build a MUC13 → chemokine pathway → EAC regulation mechanism.

In conclusion, the results from this study support the hypothesis that HPI and EAC present significant genetic level associations, which may explain their clinical correlations. Moreover, novel potential EAC genes can be identified by integrating ResNet relation data and gene expression data. This is the first study that we know of that integrates large-scale ResNet relation data and gene expression data to study molecular associations between HPI and EAC. The findings of this study may provide new insights into the current field of HPI-EAC correlation study and warrants further study using more data sets to identify novel potential EAC risk genes.

We would like to thank Dr. Sana Khan for her suggestions and writing help in the development of this manuscript. Dr. Khan is with Department of Genomics Research, R&D Solutions, Elsevier Inc.

The author HC is with Elsevier Inc.