Objective: To explore the effect of donepezil hydrochloride on cognitive function recovery of rat with Alzheimer’s disease and the positive expression of nitric oxide synthase and acetylcholinesterase (NOS and AchE) in the brain tissues of rats with Alzheimer's disease (AD).

Methods: Forty SD (Sprague Dawley) rats were randomly classified into a model group, a treatment group, a control group, and a sham operation group. Each group had 10 rats. AD rat models were prepared with Aβ1-40. Donepezil hydrochloride was orally administered to rats in the treatment group two weeks after modeling. Rat recognition function was assessed. The positive expression of NOS and AchE in rat brain tissues was observed via immunohistochemistry after administration of 28 days.

Alzeimer’s disease (AD) is a degenerative neurosis characterized mainly by cognitive and memorial dysfunctions. It is a common dementia among the elderly. AD is now the fourth most common elderly disease that causes death after cancer, heart and cerebrovascular diseases. It seriously reduces patient quality of life and is a heavy burden families and society. The association of learning and memory impairment of AD patients with the brain cholinergic dysfunction is known. Donepezil hydrochloride is a selective inhibitor of cholinesterase.

A large number of clinical studies proved that Donepezil can significantly improve AD patient cognitive and memory functions and it was considered an effective drug for treat AD patients [1-2]. Therefore, it is of an important significance to positively explore the possible functional mechanism of donepezil hydrochloride except to inhibit the cholinesterase.

In this study, AD model rats were the research subject to study the effect of donepezil hydrochloride on NOS protein expression in hippocampal neurons and its effect on positive AchE expression in AD model rat brain tissue. The results are reported as follows.

All rats were fed for one week. They were then divided into a control group, sham operation group, model group, and a treatment group (model + Donepezil hydrochloride). There were 10 rats in each group. The treatment group was administered orally with a donepezil hydrochloride suspension of 0.5 mg/kg two weeks after the modeling. The sham operation, and model, groups were administered normal saline. The control group was fed normally. They were administered once a day, for 28 continuous days.

AD rat models were prepared with Aβ1-40 in References [3]. It was anesthetized with 10 % chloral hydrate (3 mL/kg) and fixed on the stereotaxic apparatus. A scalpel cut an incision of 1.5cm long along the anterior median line of the disinfected area. The bregma was located and adjusted and orient it with the stereotaxic apparatus to ensure the syringe needle would be aligned 2 mm on the right side of the bregma and 3.5 m behind the bregma. This is the drill point. Drill and open the skull, slowly push the syringe needle at a speed of 0.3 mm/min to 2.7 mm into the skull at precisely the hippocampus. Aβ1-40 was diluted into 5 ug/uL with sterile normal saline and cultivated at 37°C to aggregate it. Aβ1-40 of 5 ug/uL was slowly injected to the rat with a microinjector of 1uL at the injection speed of approximately 0.1 uL/min. Upon completing the injection, the needle was removed at a speed of 0.3 mm/min and the skull sealed with dental mud and skin suturing. After completing the operation, rat was subject to a conventional feeding and intramuscular injection of penicillin against infection. 1uL of normal saline was injected into the hippocampus of rat in the sham operation group and the operation method was identical to that in model group.

3.3 Evaluation of Rat Learning and Memory

A Morris water maze was used to test learning and memory abilities. For one week after modeling and three weeks after drug administration, rats were subject to a water maze exercise of for 7 days, once in the morning and the afternoon. On day 7, a place of entry was selected to put the rats into the water facing the pond wall to observe and record the time required for rats to find and climb onto the platform, namely, escape latency.

4.1 Learning and memory by group 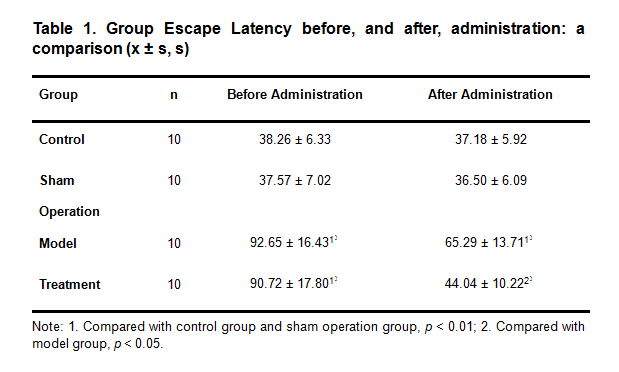 Table 1. Group Escape Latency before, and after, administration: a comparison (x ± s, s)

NOS and AchE positive expression by group was detected using immunohistochemistry. A chocolate brown, or brownish yellow, stain in neuronal cell cytoplasm, or protrusions, are positive. The main expression area is in hippocampus. NOS expression in the model group decreased while AchE expression increased, indicating a statistically significant difference compared with the control, and sham operation, groups (p < 0.01). After drug administration, NOS expression in the treatment group increased and AchE expression decreased, which indicates a statistically significant difference compared with the model group (p < 0.01). (Table 2 and Fig. 1 and 2). 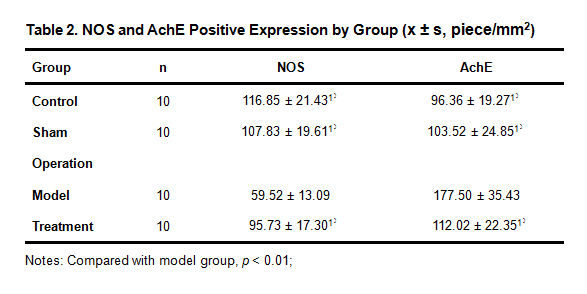 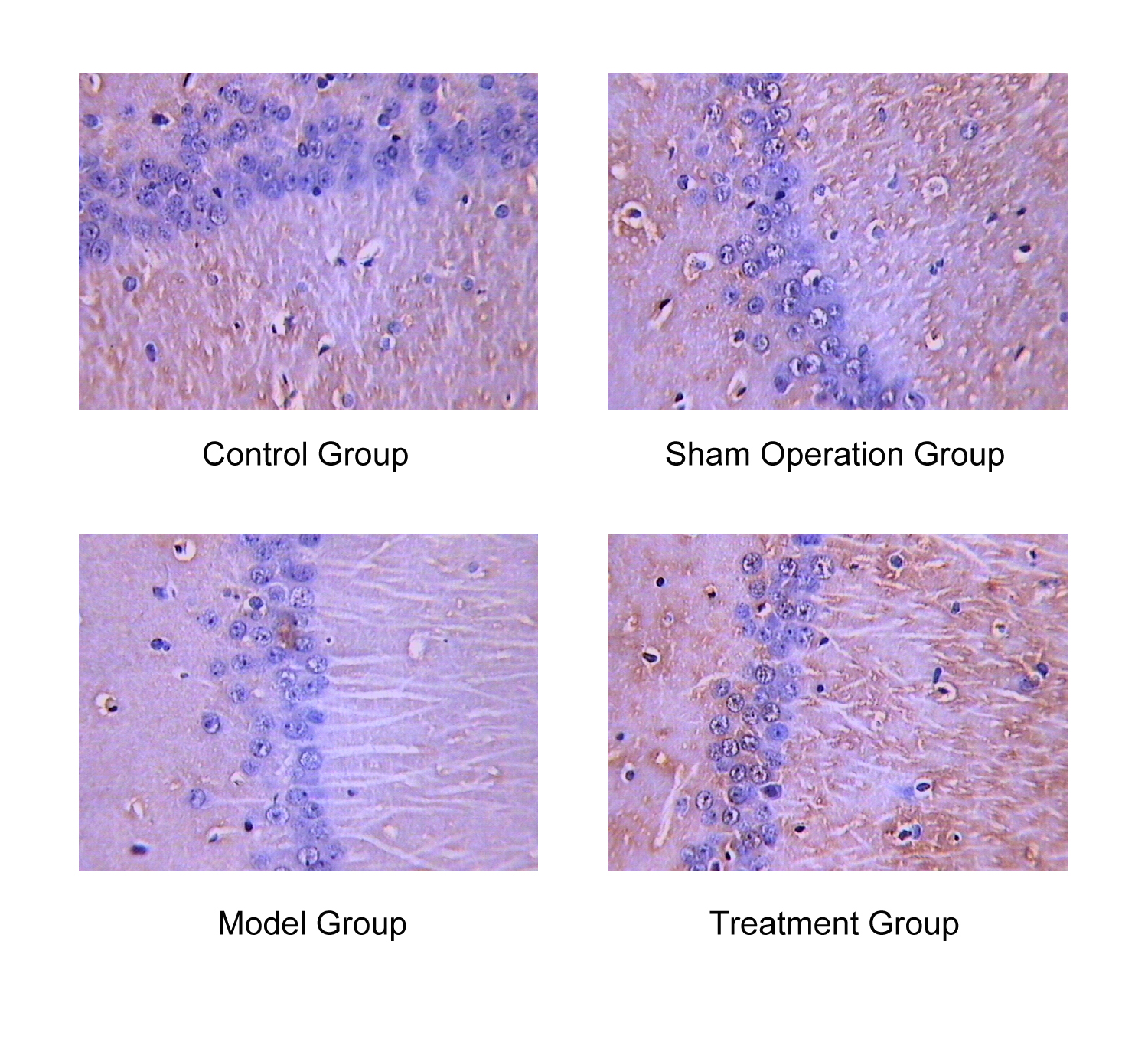 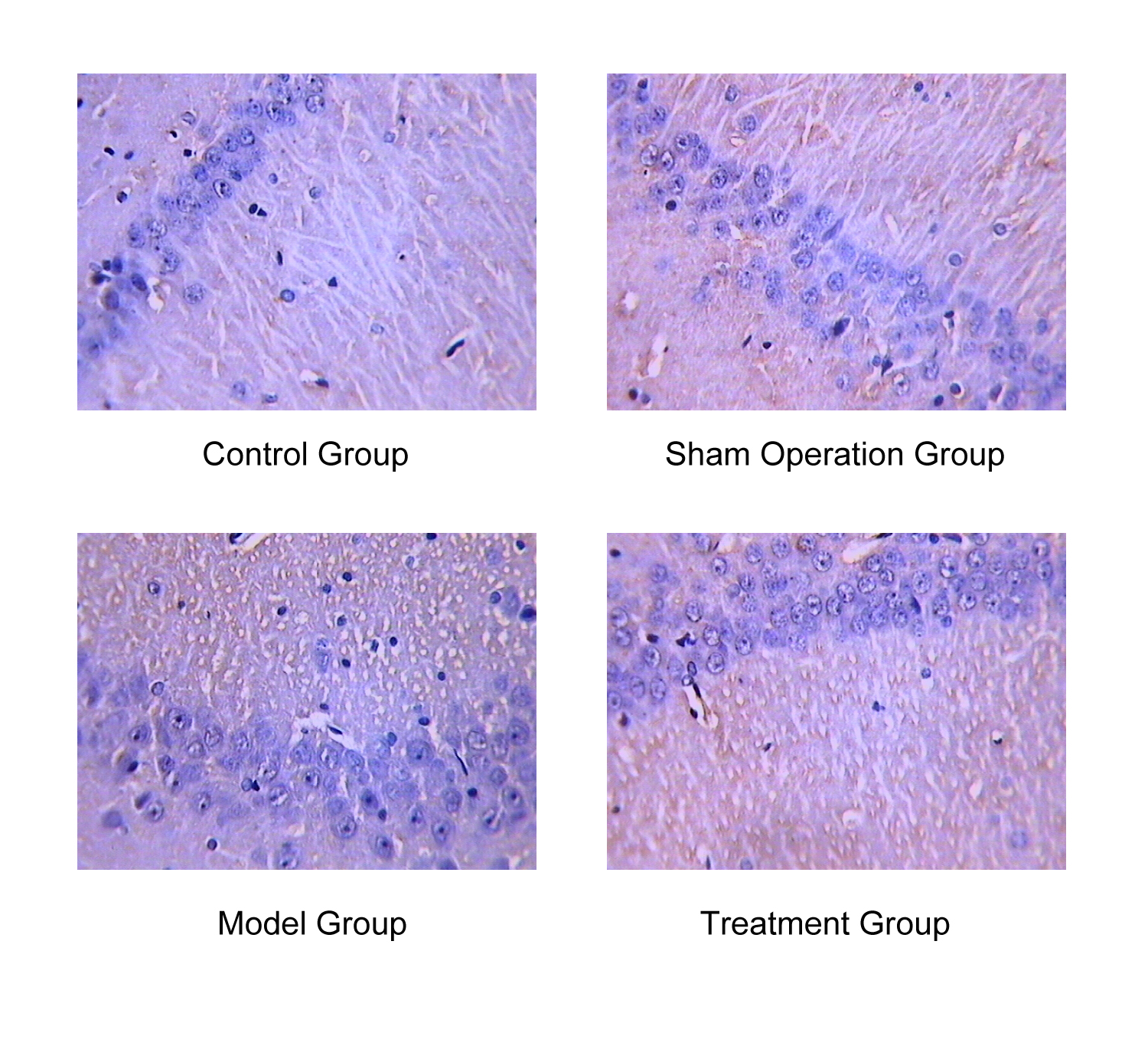 Currently AD pathogenesis is unclear. There are many theories concerning its etiology, including: genetics theory, β-amyloid protein (Aβ) deposition theory, cholinergic theory, inflammatory theory, excitatory amino acid theory, free radical damage theory, and aluminum poisoning theory. AD pathology is characterized by cerebral cortical atrophy, accompanied by Aβ deposition, neurofibrillary tangles, large decreases in the number of memory neurons, and senile plagues formation. At present, Aβ is generally accepted as the main factor inducing AD. The key for AD formation and development of the neuropathological process is that Aβ continuously injures brain cells to lead to a progressive mental decline and causing senile plague formation. The Aβ deposition can decrease the choline acetyltransterase activities and cause the reduction of cholinergic neurons around Aβ deposition. This leads to memory impairment. It has been reported that some medications can result in a lessening of Leydig cells and regressive and / or degenerative changes in the epididymis, seminal vesicle, ventral prostate, and coagulating gland in male rats [4]. This experiment used the currently accepted method of acute injection of Aβ in the rat brain. It can cause the functional loss of cholinergic neurons and learning and memory abilities dysfunction, and result in Aβ deposition in the brain. Therefore, it is a better animal model. In this experiment, model group escape latency persisted for two weeks after modeling (p < 0.01), indicating the decline of learning and memory ability of rats after modeling and a successful modeling.

The current accepted theory attributes AD cognitive symptoms to a shortage of cholinergic neurotransmitters. Acetylcholine (Ach) is an important neurotransmitter in the cholinergic pathway of the central nervous system. It is has widely involved in the cognitive process of in-vivo learning and memory. Learning and memory ability decrease with as Ach levels decrease. Donepezil hydrochloride is a hexaoxypyridine oxide and the generation-II specific reversible central AchE inhibitor. It can increase Ach concentration by inhibiting Ach hydrolysis to improve the cognitive function of AD patients [5]. However, Ach is not stable in the body and it hydrolyzes into choline and acetic acid. AchE activity levels can indirectly reflect the Ach level. Some animal studies reported that donepezil hydrochloride had treatment effects on Aβ-induced AD rats [6]. It could significantly improve AD model rat learning and memory impairment and reduce the injury of free radicals in hippocampus neurons [7]. The results of this study showed that donepezil hydrochloride could improve AD rat learning and memory function (p < 0.05), indicating that it could inhibit AchE activities in rat brains and AchE positive expression of hippocampal neurons in AD rats was also significantly decreased (p < 0.05).

It is currently thought that long-term potentiation (LTP) is the main mechanism of synaptic plasticity, learning and memory. Nitric oxide (NO) can maintain the LTP effect of hippocampal synapses, and it can promote AcH release and other neurotransmitter releases in the form of super-nitrite in the central nervous system to affect learning and memory [8]. NO is considered a key transmitter in learning and memory. NO is not stable in the body. NOS is the key enzyme, rate-limiting enzyme in NO synthesis. Change in this activity can reflect NO level in the body. Studies show that the learning and memory processes of experimental rats may be associated with nNOS activity increases [9]. The results of this study showed the increased AchE positive expression and the decreased NOS positive expression in rat hippocampal neuron cells in the model group (p < 0.01), indicates a decrease in learning and memory ability of model rats. After the treatment with donepezil hydrochloride, NOS expression in AD rat hippocampal neuron cells increased and the difference was significant compared with model group rats (p < 0.01). This suggests that donepezil hydrochloride can improve rat learning and memory abilities by promoting NOS expression and enhancing the level of NO. These studies show that donepezil hydrochloride can improve AD rat learning and memory impairment, and it can also associate with the enhancement of NOS activity in the brain hippocampus and the adjustment of the metabolism of messenger molecular NO in the central nervous system in addition to the inhibition of the AchE activities.