Flupirtine: A Narrative Review of Its Role in Acute and Chronic Pain Management

Flupirtine is a non-opioid, centrally acting analgesic which is marketed for oral and per rectal use. It has been used in managing acute post-operative pain, musculoskeletal pain and muscle spasm. NMDA (N-methyl-D-aspartate receptor) antagonism leading to opening of potassium channel opening at the neuronal membrane appears to be the mechanism of pain relief of this unique drug. It has membrane stabilization properties and ability to modulate GABA-A receptor at the neuronal level. The pain relief offered by flupirtine is comparable to NSAIDs or COX-2 inhibitors. Flupirtine doesn’t lead to drowsiness, constipation, nausea ,vomiting and tolerance which is seen with opioids. Unlike NSAIDs, it does not lead to gastric acidity, renal dysfunction, thrombotic events and bleeding due to anti-platelet action. The rise in serum creatinine and liver enzymes are transient and negligible. In few studies, the drug has been found to have cyprotective and anti-oxidant properties. It has been used in chronic headaches, migraine and parkinsonism in a small group of patients. The drug has been approved for use in European countries but the US-FDA approval is still pending.

Post-operative pain is a distressing experience which can have deleterious consequences on the patients psychology if not handled effectively. This affects overall recovery and can end up in hospital phobia which can affect the family, social and personal life [1]. Anesthesiologists are trained to address post-operative pain in aggressively by using central neuraxial blockade wherever indicated (continuous epidural catheter infusion), peripheral nerve blocks either single shot or continuous infusion of local anesthetic by placing a catheter, intravenous or oral opioids (morphine, diamorphine, tramadol, tapentadol), non-steroidal anti-inflammatory drugs (NSAIDs) and COX-2 (cyclooxygenase-2) inhibitors if there are no contraindications, local anesthesia infiltration at wound site and acetaminophen [2]. Non-opioid analgesics (NOA) are drugs which are used in different combinations for postoperative pain relief. NSAIDs, COX-2 inhibitors, nefopam, metamizol, anti-depressants and anti-convulsants are the drugs that belongs to NOA [3]. The above mentioned pain relief strategies when used in combination works well in providing pain relief with faster recovery and rehabilitation of the surgical patient [4]. Epidural catheters can not be used for all surgical patients (head and neck, neurosurgical patients). The drugs mentioned above cannot be used in all patients due to either the side effect profile or the associated co-morbidities that the patient has. For e.g., NSAIDs and COX-2 inhibitors which provide adequate pain relief cannot be offered to elderly patients or patients having cardiac or cerebrovascular disease or risk factors. Epigastric pain, gastric acidity, heartburn are the other problems associated with its use [5]. NSAIDs and COX-2 inhibitors are contraindicated in patients with renal impairment . An indwelling epidural catheter with continuous local anesthesia infusion with or without opioid provides adequate pain relief in the post-operative period. Intravenous potent opioids are prescribed intravenously or with patient controlled analgesia ( PCA ) pumps when the patient is in monitored areas. Oral opioids can be prescribed later but they have adverse effects like nausea, vomiting which affects the entire recovery and discharge of the patient. Constipation and drowsiness are other issues associated with use of narcotics. Acetaminophen is a safe drug which can be used in patients of all age groups safely, except in patients with hepatic impairment. However, it can not be used as the sole analgesic because it is effective in mild to moderate pain only.

The analgesics commonly used are prostaglandin inhibitors ( NSAIDs), COX-2 inhibitors, drugs acting by µ receptor agonism (opioids) and acetaminophen which has a centrally mediated action. Flupirtine is a centrally acting, non-opioid analgesic which also has an indirect NMDA receptor antagonistic action by activating potassium channels. The drug is available for oral and per rectal use. This unique potassium channel opening property exhibited by flupirtine has not been demonstrated by any other analgesic. Therefore it belongs to a class of drug known as “selective neuronal potassium channel opener” or SNEPCO [6]. The drug also possess GABA-A receptor modulatory property.

Since opioid antagonist naloxone has no effect on the analgesia provided by flupirtine, it is very clear that the pain relief provided is independent of µ receptor effect [7]. Flupirtine is chemically a triaminopyridine derivative (2-amino-3-ethoxy-carbonylamino-6-4-fluoro-benzylamino-pyridine). The chemical structure is shown in Fig. 1 Chemical Abstracts Service (CAS) Registry Number for flupirtine is 75507-68-5. 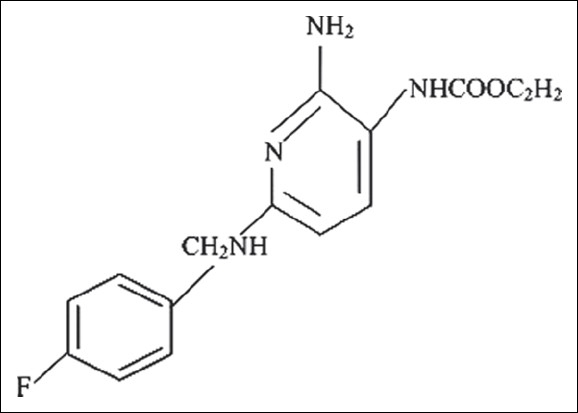 Neuronal hyperexcitability is seen in chronic pain syndromes, neurogenic pain, migraine headaches, pain of neurogenic origin and muscle spasm. The unique property of potassium channel opening has been shown to be effective in above mentioned situations. However, the drug has no antipyretic and anti-inflammatory properties seen with NSAIDs and paracetamol. This could be because the prostaglandin inhibition done by it is negligible [8]. The drug has been successfully used in the treatment of acute postoperative pain in combination with narcotics and NSAIDs or alone in several studies [9,10,11]. In a recent randomized controlled study by Thapa et al, the investigators found significant morphine sparing effects in females undergoing hysterectomy under general anesthesia who were premedicated with 100 mg oral flupirtine 1 hr prior to surgery [12]. In an editorial by Rivera-Arconada I, it was mentioned that the neuronal Kv7 channels opening properties of flupirtine are responsible for regulating nociceptive pathways. This property of flupirtine is helpful in patients with chronic cancer and non-cancer pain [13]. The analgesic action is due to NMDA receptor antagonism which opens the potassium channels that leads to decrease in NMDA mediated increase in intracellular concentration which is mediated by glutamate. The muscle relaxant property of flupirtine is due to dose dependent inhibition of mono and polysynaptic reflexes. This property can be used for treating musculoskeletal pain. The drug has been shown to have good results when used in persistent tension headache and acute in attacks of migraine. Similarly, flupirtine has shown to be effective in patients with neurogenic pain due to lumbar and cervical spine diseases, chronic cancer pain and acute post-operative pain. The drug has shown to effective in relieving distressing pain associated with fibromyalgia [14]. Neuroprotective effects has been described in patients who take flupirtine. This protection appears to be conferred on patients Alzheimer’s disease, multiple sclerosis, prion diseases like Creutzfeld-Jacob disease. The drug has also been shown to be effective in patients with parkinsonism and in cataleptic states where the muscular rigidity has been seen to be reduced when used in therapeutic doses [15].

2.2 The history of Flupirtine

FLupirtine is not a new drug. It was first marketed and used in 1980 by Degussa Pharma, Germany. It has been used as an analgesic in European countries since 1984. Flupirtine is not approved by US FDA as of now, however there is an attempt made to initiate its use for fibromyalgia. A Phase II clinical trial started in 2008 investigating efficacy of flupirtine for relieving pain due to fibromyalgia. Although the drug was found better when compared to other approved drugs like pregabalin, duloxetine and milnacipran; the results of the trial are not out yet [16]. The trial involving flupirtine in fibromyalgia was started by Adeona Pharmaceuticals which later became known as Synthetic Biologics. The brand name registered was Effirma. The trial was registered in 2010. However, nothing has been known about the trial after that which means patients in United States with fibromyalgia are treated with pregabalin, duloxetine and milnacipran.

In 2013, PRAC (Pharmacological Risk Assessment Committee) submitted a review to the EMA (European Medical Agency) regarding use of flupirtine and flupirtine containing medications. The EMA suggested that flupirtine should be used only in patients who cannot tolerate NSAIDs or weak opioids for acute pain and the medication should not be used for more than 2 weeks [17].

Owing to its water soluble properties, flupirtine gets rapidly absorbed after oral administration. The absolute bioavailability after an oral dosing is 90 % and 72.5 % after a per rectal administration. The volume of distribution described after an oral dose is 154 L in health. In elderly patients and in patients with renal impairment, it has been found to be 195 L and 212 L. In metabolism involves conversion into 2 metabolites: 4-fluoro-hippuric-acid and D13223 which is formed due to acetylation. The acetylated product is an active metabolite with up to 30 % analgesic potency [18].

NSAIDs causes gastric acidity, renal dysfunction, bleeding diathesis due to anti-platelet action and carries warning in patients with cardiac and cerebrovascular diseases. Flupirtine possess none of the above mentioned problem associated with use of NSAIDs. The drowsiness associated with its use is negligible compared to routine narcotics like tramadol, fentanyl and morphine. No addiction has been reported with the use of flupirtine. Dose reduction is required in renal failure and hepatic dysfunction. Use in pregnant and lactating females and children below 6 years has not been established or studied [20].

The drug is generally well tolerated and is devoid of respiratory depression, heartburn, renal dysfunction. Mild increase in liver enzymes, bilirubin and creatinine was noted in some patients but that was not significant to interrupt treatment. Hepatotoxicity however is a concern with this drug, although the incidence of patients known to develop that is not known. Therefore, it is suggested not to use paracetamol in combination with flupirtine especially in patients who have raised bilirubin and liver enzymes or in patients who are susceptible for acute liver injury. Most common adverse events observed were nausea, vomiting, diarrhoea, constipation, sleep disturbances, fatigue. When administered along with oral anticoagulants, monitoring of coagulation profile is recommended. Long term use ( more than 6 months ) is not recommended as it is has been associated with hepatic enzyme induction [21].

Flupirtine is a unique analgesic which is safe, well tolerated and devoid of the side effects seen quite frequently with opioids and NSAIDs. Flupirtine could be prescribed to surgical patients who have history of hypersensitivity to NSAIDs, COX-2 inhibitors or have contraindications to its use. It has been shown to be effective in chronic pain patients when WHO pain ladder regime was not effectice or when the side effects experienced are more with use of potent opioids. The drug does not lead to dependence even after several months of use, however regular liver function tests should be monitored when used for chronic pain. The drug has been shown to be effective in fibromyalgia when the other drugs like pregabalin and duloxetine are not effective. There is no data suggesting life threatening complications with the use of flupirtine in acute, chronic and musculoskeletal pain syndromes. The use of flupirtine in parkinsonism, Alzheimer’s disease, multiple sclerosis, neuroprotection and anti-apoptosis effects is anecdotal and needs well designed studies to establish dose, efficacy and safety.