Andrographis paniculata is used in Asia from centuries in traditional medicine to treat gastrointestinal (GI) tract and respiratory infectious diseases. It has been reported that Andrographis has a broad range of pharmacological effects [1]. It has been suggested it’s safe in controlled clinical trials report for treating upper respiratory tract infections. It also showed significant cardio protection by inducing antioxidant activity in myocardium [2]. Cytotoxic activity against cancer cell lines has been reported by Compounds of Andrographis paniculata [3]. Antimicrobial activity against eleven bacterial strains by ethanol extract of Andrographis paniculata have been reported [4]. Andrographolide have been reported to hypoglasmic activity in rats [5]. Antiulcer activity was reported in duodenal ulcer model in rats [6]. Hepatoprotective effect was reported on acetaminophen induced hepatotoxicity in albino rats [7]. An andrographolide was also reported to induce apoptosis in TD-47 human breast cancer cell line in a time and concentration-dependent manner by increase expression of p53, bax, immuno histochemical parameters such as caspase-3 and decrease expression of bcl-2 [8]. Andrographis paniculata, dry leaf powder was reported to spermatogenesis, cessation of degenerative changes in the seminiferous tubules [9]. The extract produced significant muscarinic activity, which accounts for its antivenom effects [10]. Many of the conditions commonly treated with Andrographis paniculata in traditional medical systems are important, which requires further investigations for benefit in cancer treatment.

The experiment was approved by Institutional animal ethic committee before conduction of the experiments. These Swiss albino mice were housed in polypropylene cages at temperatures of 24 ± 30.C. Mice were provided with standard mice feed and tap water ad libitum.

Plant material (Andrographis paniculata) was collected and the specimen was authentified by the botanist of Deen dayal Research Institute, Chitrakoot (MP), and India. Leaves and stem were washed, air dried, powdered and extracted separately using 50 % methanol in a separating funnel. Extract thus obtained were vacuum evaporated into powder. These extract was again dissolved in double distilled water (DDW) immediately prior topical application. We have already done pharmacological screening of the components of extract in different solvent system such as methanol, Ethanol, Benzene and chloroform which showedthe presence of carbohydrate, flavonoid, Glycoside, Steroid, Resin, Tanin, Alkaloid.

One day before the experiment commenced, the dorsal skin on the animal’s back was shaved. Two stage protocol was used as described by Berenblum [11] and standardized by Agrawal et al [12]. Animals were randomly allocated into 7 groups of comprising six mice each group. Single topical application of a carcinogen7, 12-dimethylbenz (a) anthracene (DMBA)and then followed by a promoter (croton oil) twice in a week were used to induce tumours. The detail protocol was described in our earlier published paper [17].The treatment was provided topically to the shaved area. All animals groups were observed for gross and microscopic changes weekly All mice were weighed and examined for skin papillomas and results were recorded. The glutathione levels were measured by the method as described by Sedlak and Lindsay,1968 [19].

The extract of Stem and leaf of Andrographis paniculata on Hela cell line was studied. It was determined by MTT assay as described by Mosmann, 1983 [16]. For MTT assay, the extract at the dose of (0-1000 µg/ml and 5 µl/100 µg of cell suspension) was kept for 24 hours. Hela cells were cultured and treated with different concentrations of extract. 2 hours prior to the termination of experiment, MTT was added to cell culture at 0.25 mg/ml (5 µl of 5 mg/ml in 100 µl of cell suspension) concentration. At the end of the experiment, culture supernatant was removed and cell layer was dissolved in DMSO and further read in a plate reader at 550 nm and 660 nm. graph 1 and 2 plotted between the relative percentage death of cells against different concentration of Andrographis extract after 24 hour.

It was done by the method as described by Schmid (1975) [13] and Aron et al [14] and standardized by Agrawal et al [15].For the micronucleus assay, the extract at the volume of 0.2 ml at different doses level such as 500, 1000 and 1500 mg/kg body weight was injected 24 hours before the treatment of Cyclophosphamide to three animals. The positive control group received single ip. dose of Cyclophosphamide The cell were stained with May-Grunewald and Giemsa, and observed under microscope at 10X100X magnification. The detail protocol a described in our earlier paper Agrawal et al [15].

The result showed that the animals of Group-V (control) produced skin papillomas, in all animals (100 %) which were observed from 5th week onwards. The significant tumour prevention was observed in the Andrographis paniculata extract treated experimental groups (25 % and 0 % in group VI & VII) compared to the carcinogen control. Cumulative number of papillomas was also reduced in the Andrographis paniculata leaves and stem extract treated along with DMBA + Croton Oil groups (5 and 0 in group VI & VII). DMBA + Croton Oil treated showed Tumor burdens and tumor yields (3.5) where as it was decreased(0.5) in androgrraphis extract treatedgroup (Table 1).The acute toxicity of Andrographis methanolic extract has been studied. It was observed that animals showed no toxicity up to the dose of 3000 mg/kg body weight in Swiss albino mice. 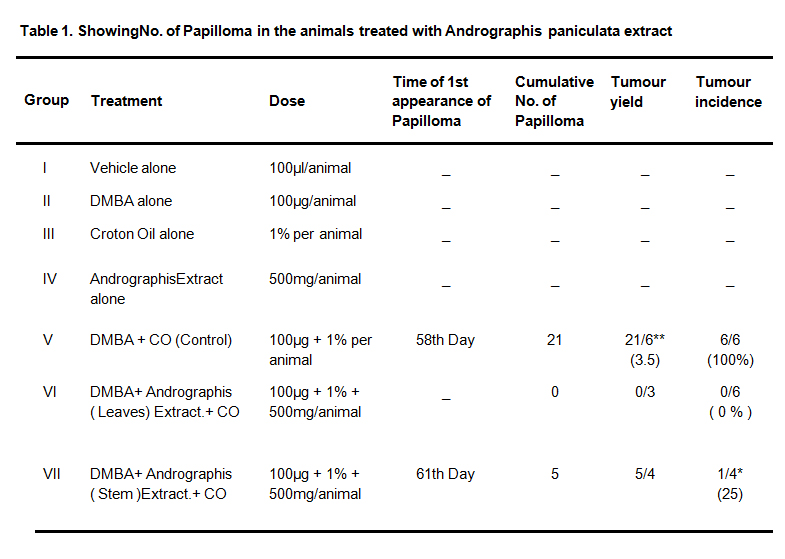 Table 1. Showing No. of Papilloma in the animals treated with Andrographis paniculata extract

*Denotes statistically significant as compared to control in Students ‘t’ test at p < 0.05 ** denotes total no. of Papilloma tumour/Total no. of animals

Table 2. Showing the level of Glutathione (GSH) in Blood and Liver

*Denotes significant as compared to carcinogen control in students‘t’ test. at p < 0.05

The cytotoxicity of the plant was studied using HeLa cell lines in Vitro models. It shows that whole plant extract of Andrographis paniculata had cytotoxic activity. Fig. 1 and 2 showed the relative percentage death of cells against different concentrationof Andrographis extract after 24 hour. 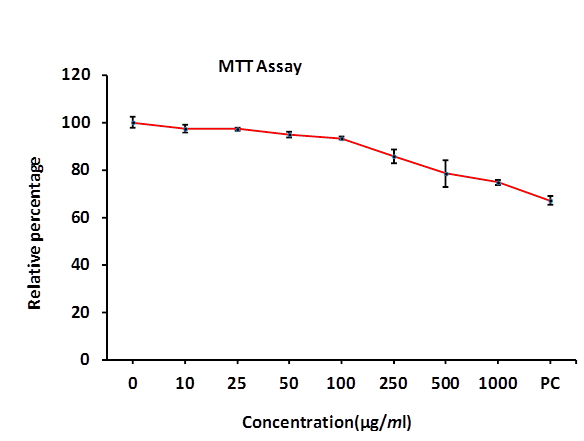 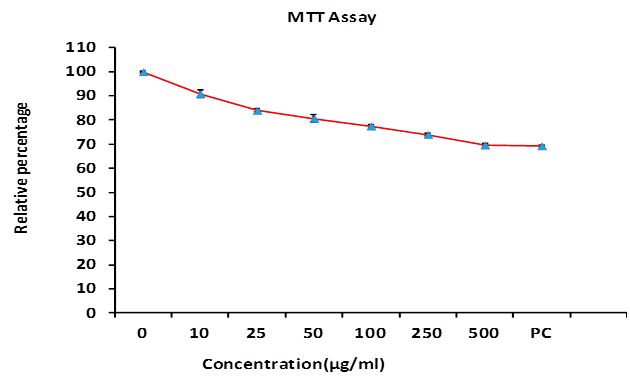 In the micronucleus assay Cyclophosphamide (CP) has been used as a clastogen and anticlastogenic effect of A.panniculata (AP) has been observed in bone marrow cells of mice. The Andrographis extract showed a significant reduction in number of micronuclei as compared the CP alone. The result of Micronucleus assay showed that single application of A. paniculata hydro methanolic leaves extract (i.p.) at the dose levels showed the significant reduction of micronucleus formation in PCE cell of bone marrow. However the micronucleus protection was not significantin stem extract of Andrographis extract treated group. The PCE/NCE ratio was comparable in all treated group as compared to CP which showed no toxicity of the extract in bone marrow cells of mice. (Table 3 & 4, Fig. 3) 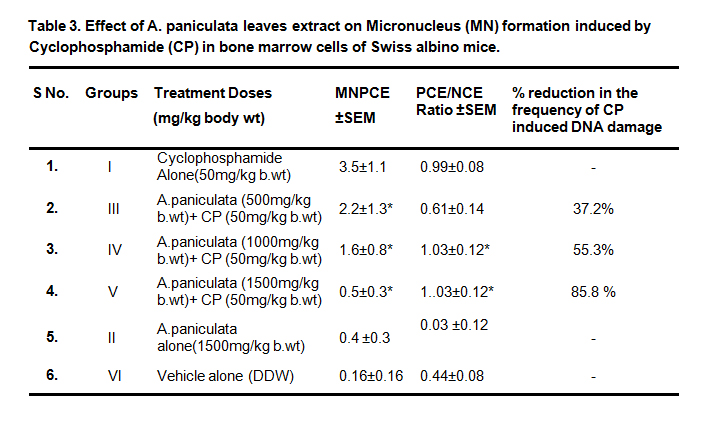 *Denotes statistically significant as compared to cyclophosphamide group at p < 0.05 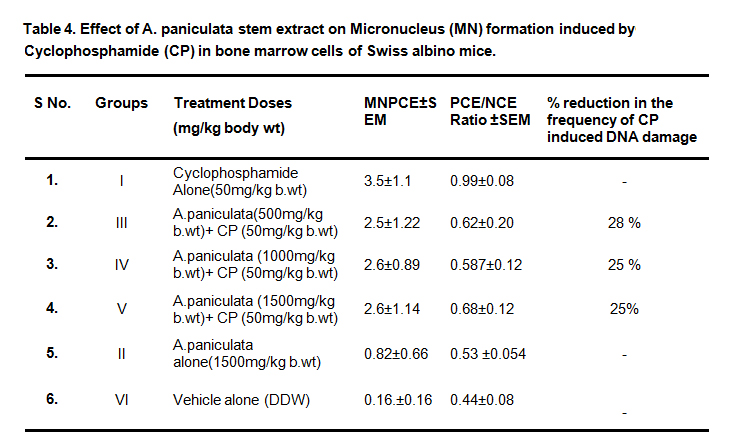 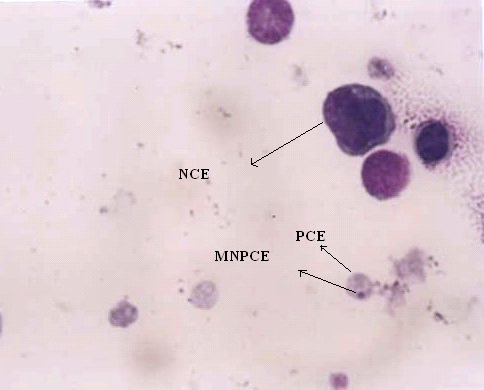 The current study demonstrates anticarcinogenic, antoproliferative and antimutagenic potential of Andrographis paniculata stem and leaves (AP) extract in skin papillomas, Hela cells lines and in bone marrow micronucleus assay. It demonstrates that a topical application of andrographis paniculata leaves and stem extract (500 mg/kg body weight) showed significant reduction in tumor incidence, in andrographis treated groups relative to the carcinogen treated control. In our previous study the anticarcinogenic activity of androgrphis paniculata leaves has been reported [17]. The methanolic extract of leaves of AP was more effective than stem extract in both Papilloma and micronucleus assay.The mechanism which shows induction of glutathione levels in liver tissues may be due to detoxification mechanism by liver of the animals. However the cytotoxicity anticarcinogenicity may be due to reactive oxygen species [18]. The present study suggests the anticarcinogenic and antimutagenic activity of Andrographis. paniculatawhich is an important drug in traditional medicine and may be useful in treatment of cancer patients.

The authors are thanking to the M.P. Council of Science and Technology, Bhopal for its financial assistance and Dr. S.K. Maheshwari, Medical Director of PBCRI, Satna for providing facility to conduct the above work.