Aloe vera L (A. barbadensis) is commonly used medicinal and cosmetic plant. In the present investigations the anti necrotic and anticlastogenic activity of Aloe vera extract was studied using Skin Papilloma, Melanoma Bone marrow micronucleus and chromosomal assays in Swiss albino and C57 Bl mice. It has been observed that topical application of Aloe vera extract on the skin tumour induced by DMBA (7.12 Dimethyl Benz (a) nthracene) and croton oil have significantly reduced the tumour size, weight and histological changes as compared to control group. Antinecrotic activity was also observed in skin melanoma tumour induced by subcutaneous administration of B6 F10 cell lines in C57 Bl mice. It reduced the tumour volume and increases the significant survival of animals as compared to control group. In anticlastogenic activity, Aloe vera extract have significantly prevented chromosomal aberrations and micronucleus formations in dose dependent manner. Results suggest the antinecrotic and anticlastogenic potential of Aloe vera extract in the above test systems.

In recent years, there have been considerable efforts to find naturally occurring substances that can inhibit, reverse, or retard mutagenesis. Wide arrays of substances present in the medicinal herbs or dietary plants have been screened for their ability to prevent mutagenicity [1]. Aloe vera L. (A. barbadensis) is used for several ailments. It belongs to the family Liliaceae. It is a popular household plant, found predominantly in dry localities in most parts of the world. A. vera is a rosette, long, slender, thick, fleshy leaves, like a smooth rubbery cactus. The contents of a leaf can be separated into 2 basic components i.e. gel and latex. Aloe gel contains glucomannan, acemannan, magnesium, glucose, linolenic acid, saponins, sterols, calcium, and cholesterols [2], while aloe latex (leaf lining) contains anthraquinone glycosides such as aloe emodin, and barbaloin [3]. A vera has high concentrations of vitamins A, C, and E [4] zinc [5] and amino acids, which are responsible for its usefulness in various pathological conditions. The acemanan of aloe has been used for topical treatment of wounds, minor burns, and skin irritation. Its Jel is commonly used on burns and minor cuts for enhancing the healing of dermal wounds [6]. Some recent studies have demonstrated the direct inhibitory effects of aloe extract and aloe gel on both tumor initiation and promotion. A polysaccharide fraction of aloe gel and aloe extract inhibited the binding of benzopyrene to primary rat hepatocytes and thus prevented the formation of potential cancer-initiating benzopyrene -DNA adducts [7]. In another study, aloe gel caused an induction of glutathione-S-transferase and inhibition of tumor promoting effects of phorbol myristic acetate [8]. These studies suggest a possible benefit of using aloe gel and aloe extract in cancer chemoprevention. Polysaccharides from aloe have shown radioprotective effects [9]. The alcoholic extract of Aloe vera has dose dependently inhibited gastric acid secretion [10]. Aloe emodin of Aloe vera have significantly inhibited MCC cells growth and possess specific toxicity to neuroectodermal cells [11]. Acemann a carbohydrate from Aloe vera has shown anti immune and anti tumoral activities [12]. The extract exhibited the best for radical scavenging activity [13]. Antinecrotic and anticlastogenic activity gel and extract have not been well reported previously therefore in these studies preventive effects of Aloe vera extract has been studied using skin Papilloma model, micronucleus and chromosomal tests.

Random bred Swiss mice of the weight between 15-20 gms were collected from animal colony of PBCRI, Satna. The synthetic pellet diet was obtained from Golden feeds Ltd, Delhi and R.O. water were provided ad libitum. The Animal ethical approval was obtained before conduction of the experiments. The chemicals were procured from Sigma chemical co. USA and Ranbaxy co., Mumbai. The Aloe vera extract was prepared from the gel collected from leaves as described in our earlier paper (Agrawal et al, 2013).

(a) Aloe vera treated group: The 4 tumour bearing animals were given topical application of 100Dl of Aloe vera extract (dose of 500 mg/kg body wt.), 2 times in a week for 16 weeks;

(b) The 4 tumour bearing animals were kept as a control till 16 weeks. The animals of both groups were euthanized after 16 weeks and tumour size as well as weight were measured and tumour tissue were fixed in 10 % formalin for histology.

I Group (Control): These animals received no treatment;

The original cell lines (B16F10) were received from National Centre for Cell Science, Pune. These were maintained in our laboratory by serial transplantation of tumour cells by injecting 5 lakh cells subcutaneously to each mice for the induction of melanoma tumor. This method was performed as per the method reported by Oomman et. al. 1999 and standardized by us (Agrawal et. al. 2009). The animals (C57BL mice) were divided into two groups comprises of 4 animals. When the tumor is grown up to 2-3 cm. large, the animals were divided into different. Groups such as control and tested group and each group comprised of 4 animals. The treatment of Aloe vera extract was given orally at the dose of 500 mg/kg .The survival rate was recorded. The data are represented in percentage survival of the animal, reduction in tumor volume, the life span of animals and total survival of animals. % ILS = (MST of control group-MST of experimental group/MST of control group) -1 ×100 whereas. The inhibition rate of tumor. It was calculated by following formula: % IR = 1- (Tumor volume of test group/Tumor volume of control group) × 100. Statistical analysis was done using Students ‘t’ test.

The Antimutagenicity of Aloe vera extract was studied by chromosomal aberrations and micronuclei induction in the bone marrow cells of mice. For chromosomal aberrations assay method of Preston et al. [14] and the method of Schmid [15] for micronucleus assay and standardized by us was undertaken [16, 17]. Aloe vera extract at the volume of 0.2 ml was injected at different dose levels such as 250,500 and 750 mg/kg body weight 24 hours before the treatment of cyclophosphamide at the dose of 50 mg/kg body weight in 0.9 % saline. Colchicines (4 mg/kg b.wt) was administered intraperitoneally 2 hours before the harvest of the cells. The slides were prepared essentially as per modified method of Preston et al [14] for chromosomal aberrations and method of Schmid [15] and standardized by us [16, 17]. Both femur bone of mice were dissected out and the bone marrow was flushed out in HBBS solution as described earlier [16, 17]. The smear was prepared in precleaned slides, air dried and fixed in absolute methanol. The slides were stained with Maygrunwald and Giemsa stain. The total no. of 2000 cells were counted and number of micronucleated polychromatic erythrocytes cells were scored. PCE: NCE ratio was also calculated. The data are presented in MNPCE ± SE. The statistical significance was calculated using Student’s ‘t’ test.

The findings of the present study on melanoma tumor model showed that the mice which received the treatment of Aqueous extract of Aloe vera at the dose of 750 mg/kg showed decreased Tumor volume of 2073.7 ± 8.8 mm as compared to untreated group i.e. 3424.9 mm. Whereas the survival of the above groups of animals were 20 days. When Aloe vera extract (750mg/kg) in combination with Cyclophosphamide (50mg/kg) was given orally to mice than the Tumor Volume observed was 2380.1 ± 5.28 and Mean Survival days was 19 days. Cyclophosphamide alone showed the tumor volume of 2008.9 ± 17.0 but the mean survival days of Melanoma bearing mice were 13 days only. It seems that additive treatment of Aloe vera extract has increased the survival of the animals as compared to cyclophosphamide alone group. The histological sections of Melanoma tumor showed that maximum no. of viable cells and focal areas of necrosis were observed in untreated group. The group receiving Cyclophosphamide alone showed the presence of equal quantity of viable and necrotic cells. In combination, Cyclophosphamide with Aqueous extract of Aloe vera showed the maximum area covered by necrotic cells and few area of viable cells. It seems the more necrosis in the tumor cells represent the anticarcinogenic nature of Aloe vera leaves extract (Table 2). 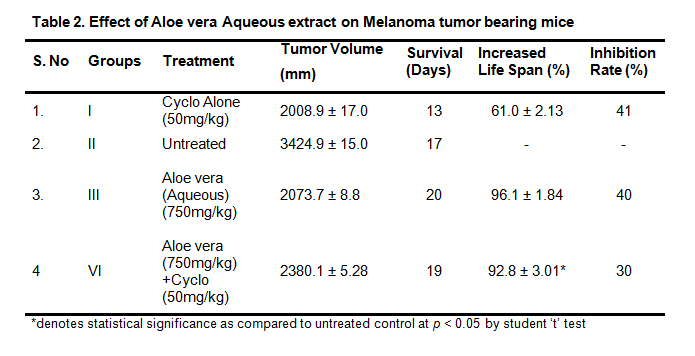 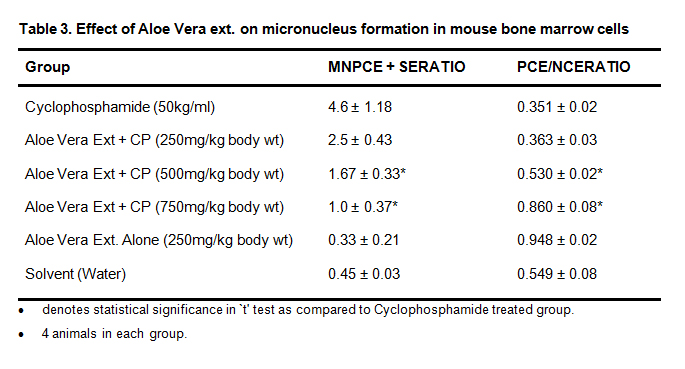 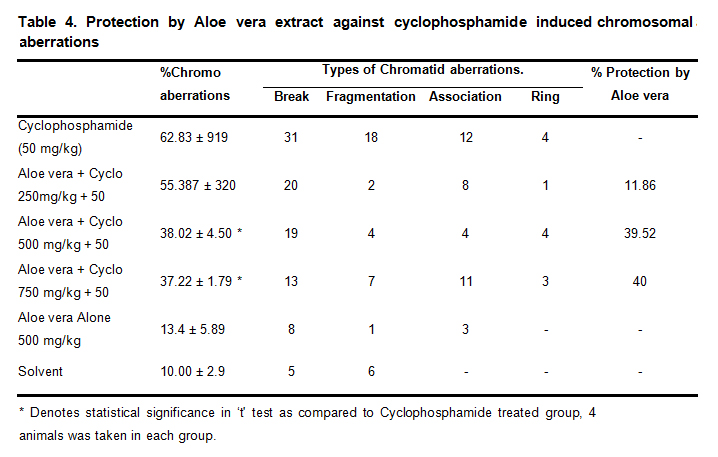 * Denotes statistical significance in ‘t' test as compared to Cyclophosphamide treated group, 4 animals was taken in each group.